HOME ARCHITECTS recently broke through a barrier in house size, creating a “CotMan” design that is only 1,892 HSF (heated Square Feet) that feels like a house of twice that size. 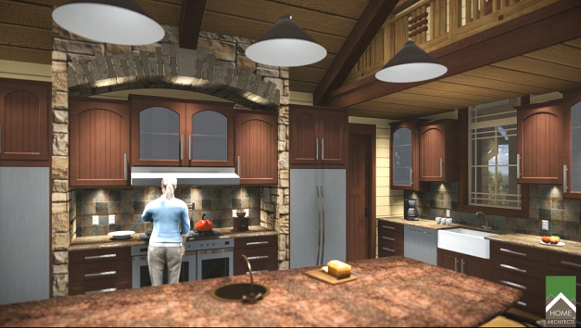 Rand Soellner, ArCH/NCARB, Senior Staff Architect of the firm, said that he used to design projects for one of Frank Lloyd Wright’s main 12 apprentices.  What he learned, along with his company’s own experience, is that creative Architects can combine the space of related functions, without fixed walls (partitions) and instead overlap the spaces between them to create much larger rooms with combined uses.  Hence today’s “Great Rooms,” which account for about 95% of what the buying public wants, but can’t always find.

This architectural firm took a large step forward, also incorporating “Flex-Space” planning concepts, wherein they used rolling sections of barn doors to allow some of the spaces (on the 2nd floor loft area) to be either compartmentalized as the 3rd Bedroom, or opened up as a spacious Home Office, open to the overlook railing, enjoying the cathedral ceiling vaulted area over a Great Room as part of the space in the office.  Some people call this the company’s “Transformer” feature, reminiscent of the movies of the same name, where large robots move panels and features around an in their bodies to become something different from what they first appeared to be.

“We get Clients telling us they want to downsize, yet still have the feeling of a larger house,” said Soellner, pointing at the company’s latest creation.  “The 1st Floor of this new concept house is only 1,232 HSF, and the 2nd Floor only 660 HSF.”  He explains that many homes today have over 2,100 HSF on the main level and that much again in a Basement and/or 2nd level.

Soellner continues: “Some of our Clients can afford whatever they want to build, however, they appreciate spending far less, when they construct a house half the size of what they’re living in now.”  He said that this particular design is going to be built for his own family and also made available as part of a new series for other Clients.

Lest you think there’s anything not “normal” about this design, it’s a 3 Bedroom, 2-1/2 Bath house, with most of the “normal rooms” just about anyone might expect to see ina house.  And nearly all of the spaces inside it feel, look or are larger than in many houses that are much larger in overall size.
How is this possible?
The company says that they carefully craft every square inch and remove anything that’s wasteful, like hallways, dedicated formal dining rooms, unused bathtubs and similar features and spaces that really aren’t necessary.  Soellner says that he’s been designing residences for over 40 years and when you’ve been doing anything for that long, you have to become good at it.  His company focuses on custom single family houses.

The firm calls this their CotMan series, which stands for a combination of both Cottage (small) + Mansion (for large-feeling).   As the prototype, his family’s house is their CotMan1.

He points out that there are 3 bedrooms of normal size, the master with a fireplace and on the main level (his wife is a top-selling real estate broker who knows what the buying public wants).  There are 2 and a half bathrooms.  The Master Bathroom has over 9′ of granite counter with His and Her sinks (which is about 30″ more counter that one might find in most “normal” houses these days), and a “Garden Shower” which is 7-1/2′ from left to right and 4′ in width, with large windows facing a private outdoor garden.  No shower doors necessary.  Low maintenance everything.  Durability.

Many of the the doorways feature double 2′ wide x 8′ tall doors = 4′ wide door openings which provides a “Mansion” feel to this delightfully design more modest-sized house.  Most the windows are aligned with paths of travel in the house, what Soellner calls Wright’s “View Systems” that makes people feel more connected to the outside and less internalized.

The Laundry has 2 doors: one directly into the Master Walk-In-Closet (how’s that for convenience?), and another door for guest or children to access from the other side of the Laundry.  The Master Closet is about a square, formed by the exterior walls, however, the Architect made the interior shelves in a circle, about 9′ in diameter, using every corner for bulkier items while creating a shoestacker arrangement that would make Imelda Marcos blush.

There is an entry Foyer with either a double wide 3’x8′ front entry (or optional 42″ x 8′ single door with sidelights), and a coat closet.

The Kitchen features work aisles about 5′ between counters, so that more that 2 or 3 people can comfortably move around in the space.  There’s a large farmhouse sink facing a tall window, and an arched stone wall area at an over-sized range-oven.  And of course a large central granite island about the size of a piece of plywood, with a second sink and second dishwasher.  And a stack wall-oven and microwave/storage wall.

And there’s an optional huge Pantry room between the Kitchen and the Garage (usually 3-car and large enough to park F-150s).

The Kitchen, Dining and Living areas combine to make a Great Room that the company typically calls a “Hearth Room” due to the fireplace located in the living area.  The Dining/Living typically has a series of oversize windows, over 8′ tall and 6′ wide, to bring the outside in and vice-versa.  And there’s an Outdoor Living Room, roofed and screened, oriented to grand views of nature.

The 2nd Floor has 2 Bedrooms and a full bathroom (with a tub-shower) and an open Loft area, overlooking the open plan portion of the floor below.  It’s up here that several really cool things are happening (not that the 1st Floor was lacking in outstanding features).  Both upstairs bedrooms feature rolling barn doors that allow either one or both of them to function as bunkrooms, or be closed and private.  There are normal size closets and of course a stair down to the main level below.  There’s a 2nd floor “Romeo & Juliet” porch on the 2nd level outside, that allows people there to look down to and communicate with other people on the main level Outdoor Living Room below.

The firm said that there’s a slighter large version of this house under construction right now in Sevierville, Tennessee, if anyone is interested in seeing it.