Building Code is Not Enough

Building Code is Not Enough

Building Code is Not Enough is this Architecture firm’s information about how building codes do NOT adequately protect homeowners from serious deficiencies with the construction of their new or renovation house projects. 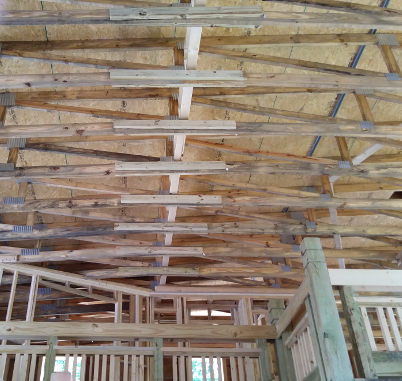 SURGEON VERSUS PARAMEDIC
Some people thinking about engaging a Surgeon for a heart operation would never say “I think I’ll talk to a medic I know from the military; I think he’ll do an okay job.”  Of course not.  Everyone would say: “I want the best cardiac Surgeon I can get, because I want to be alive when he’s done working on me.”

ATTORNEY VERSUS PARALEGAL
Similarly, if someone was facing a capital one murder charge and they were innocent, they would never say: “I think I’ll get Sammy, a paralegal my wife knows from her group therapy sessions.”  Once again: of course not.  They would say: “I want the best criminal defense Attorney we can get, so I can beat this false charge against me.”

A BUILDER REALLY IS NOT IN BUSINESS TO DESIGN CUSTOM HOMES:
AN ARCHITECT WHO SPECIALIZES IN HOUSES IS
Therefore, when someone considering having their new home or renovations designed, why would they say anything like: “I think I’ll see if some builder somewhere has an old set of plans collecting dust somewhere in his office that he can let me use for nothing, if I let him built it for me.”  Rather: they should be saying: “I want the best licensed Architect that has a specialty designing homes to design my new house project.”

Why: because some people believe the Builder can change things in the field to suit their needs which mean the old plans the Builder has don’t actually work for their needs (or their land).  Most Builders do Not employ real licensed Architect within their company.  Perhaps they have a teenage son or daughter who can run a CADD program.  That a WORLD of difference from have a licensed Architect designing your custom house.

BUILDING CODE WILL PROTECT ME, I DON’T NEED AN ARCHITECT
That’s not the case at all.
How so?  Well, there are countless conditions not covered adequately in a Code book and even if they were, not all so-called “designers” know them all and not all building code County Inspectors catch them all.

Why: Because building officials are not there to monitor and catch mistakes in some “designer’s” documents.  And building inspectors miss countless errors every day.  Conditions you would be horrified to discover.  There are about 1,000 pages in the IRC (International Residential Code) and about 60 pages for the residential portion of the IECC (International Energy Conservation Code) and perhaps another 1,200 pages or so in your particular state’s Residential Code (which amends the IRC).

BUILDING INSPECTORS HAVE NO LEGAL OBLIGATION TO PROTECT YOU
Once again: it’s not an building inspector’s job to protect you.  He is Not your insurance policy against defects on the part of your Contractor.  Their job is to check to see that major situations are generally in compliance with what they are familiar with knowing.  And not all building inspectors are Contractors, Engineers or Architects.  In fact, most building inspectors are NOT licensed anything.  Many are political appointees or unlicensed handymen that stumbled into their position.  Once again, their job is Not to protect you from inadequate design documents.

Most states have consumer laws that are “BUYER BEWARE.”  Meaning: you’re basically on your own.  You get what you pay for.

A Contractor can easily do things to lower their costs while not disclosing changes to you.  Such as lowering the SEER rating of your air-conditioning system, costing you tens of thousands of dollars more over the months and decades of your ownership.

Lower your insulation levels.  Once again, resulting in higher power bills and lack of comfort inside the house.

Lack of galvanizing on certain critical components, resulting in corrosion and structural failure.

Lack of blocking in framing, resulting in looser construction and possible structural problems.

Cheaper roofing grades: resulting in roof leaks and replacement of roofing in fewer years, instead of the longer-life materials specified by the Architect.

Cheaper paint/stain on the exterior, resulting in rot and more frequently re-coating and material replacement.

And many other items, including front-loading invoicing on projects, so if there’s a problem later, they could abandon the project, taking your larger proportion of payments made in the beginning with them.

More problematic and uncooperative subcontractors, because the cheaper Contractor failed to pay them in full.

Liens due to the above.

Many more, too numerous to mention.  Not have an Architect on a project is a sure way for homeowners to create both construction and maintenance problems for themselves.  Contractors to NOT all “know what they are doing.”  Most have large holes in their experience and expertise.

A CUSTOM HOUSE IS ONE OF THE MOST COMPLEX ARCHITECTURAL PROJECTS.  It says so in many State, Federal and professional Internet searches.  Here’s one of them:
http://architecturalfees.com/project-complexity/

So if you’re thinking “Oh, it’s just a house,”  you should be thinking: “Hey” it’s MY house and it is complex; I want it designed properly.”

LARGEST INVESTMENT OF YOUR LIFE
Your house will probably be the most expensive investment of your life.  Don’t allow anyone other a licensed professional to design it.

SOME CONTRACTORS MAY CHEAPEN MATERIALS & SYSTEMS
Your Contractor, if in charge of both design and construction, may take liberties with the quality of materials and methods of construction.  There are countless ways to cheapen a house under construction and many of these are often undetected until perhaps a decade later when something very wrong happens.  For instance: not using only PT (Pressure-Treated) wood at exteriors.  If you don’t, other wood types can and will rot over time.

KEEPING YOUR DECKS SOLID AND SAFE
This Architect was also a licensed Home Inspector for about a decade.  He saw numerous situations, such as lack of proper flashing at deck connection to the main house.  If you don’t think this is a major issue with homes, just go on YouTube and type: DeckFails.  You’ll see horrific situations where people standing on a deck suddenly fall, with the deck as it collapses under their weight, due to all manner of improper construction, including rot, lack of proper bolting and other deficiencies.

LOWER POWER CONSUMPTION
Compare your power bill to the Architect’s.  His is usually between $48/month (spring & fall) to around $200/month (in the dead of winter).  Due to him specifying his project insulations at BETTER than code requirements to result in a much tighter house with lower power bills and better comfort for the homeowners.

KEEPING OUT PESTS
Does your house have bugs?  Many of this Architect’s have nearly none.  This is due to his specifying crawlspace encapsulation and better sealing of all exterior wall, door and window joints to keep out unwanted air infiltration and  pests.

MAXIMIZING YOUR VIEWS
Very few Contractors know how to install LARGER window openings and still be able to resist the ferocious winds mountain houses can face.  Therefore, they use a greater proportion of solid wall and smaller windows.  When you have a great mountain view, that’s downright criminal.  Having an Architect that knows how to install a large billboard’s worth of glass facing your great view can make all the difference in the world.  Don’t skimp on design talent with your retirement house.

FOR INSTANCE
Just one real-world example:  Take a look at the photo at the top of this article.  Roof trusses, with splices made in the general area of the approximate middle, reinforcing the trusses.
Hmmm.  What’s that all about?  Well, it turns out the initial General Contractor for this project had the prefabricated roof trusses delivered to the jobsite nearly 3 months early.  As a result, the trusses were exposed to weather: snow, ice and rain for all that time.  Even though some temporary covering was placed over the trusses.  There’s no perfect way to prevent environmental degradation.  When they started to be erected with a crane, one of the trusses cracked, due to the wood having absorbed moisture and the gang-nailers let go when the crane operator picked up the truss from the middle, sideways, causing undue strain on the truss.  It broke into 3 pieces.  A replacement truss was ordered and installed, but that one truss breaking worried the Architect.  The Contractor wasn’t worried.  It wasn’t his house, after all.
So: the Architect ordered a center stiffener of PT wood, to be installed in each side of each roof truss, fastened with ten #9 long star-drive screws with protective exterior coating, making the precise location of the previous truss failure one of the strongest locations on all of the roof trusses.  Cost: another $400.  Safety forever: priceless.

AND: the shop drawing indicated bracing of roof trusses is, in this Architect’s opinion, inadequate.  In what way?  In terms of lateral bracing, to prevent the entire roof “house of cards” from falling over, being pushed by wind forces.  This particular Architect usually indicates a lateral 2×4 or 2×6 between most of the vertical struts of the roof trusses, locked in place with star drive screws, to brace all of the roof trusses TOGETHER, like a large space frame, making the roof substantially stronger for pennies on the dollar.  This Architect shows these on his Building Section drawings and clearly states that these braces are IN ADDITION TO any braces indicated on shop drawings.  One more benefit of having a real Architect designing and detailing  your project: safety and stability.

SUPERIOR DESIGN AESTHETICS AND ORGANIZATION
There are people who are trained and inspired to create a work of art of your house for you, that suits your Lifestyle and Land perfectly.  Contractors and other are not trained to reach this superior level of design skill.  Only Licensed Architects who specialize in the design of houses have this training and skillset.

There are countless other issues, because, as said above: a custom house is one of the most complex type of architectural design challenges.  Make sure you get the best professional to design your custom residential project: a Real Architect.  You’ll be glad you did.

code is not enough