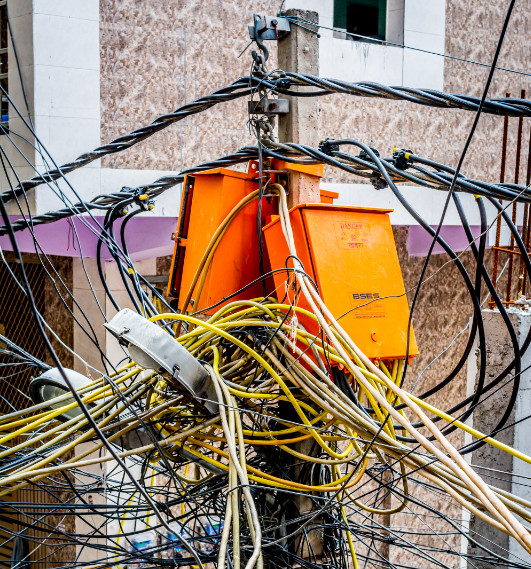 Photo by Gayatri Maihotra on Unsplash (not a Frontier image)

Frontier is the beleaguered Internet tech company that bought Verizon’s aging infrastructure on the ground about a decade ago.  Since that time, Frontier has discovered that the 1979 overhead and underground wires and switchgear and other aspects of that system are a source of constant maintenance.  Frontier has been applying bandaids during this time and the ultimate answer is to install new fiberoptic cables, but apparently Frontier’s top management is probably more concerned about their yearly bonuses and golden parachutes than solving the problem in a holistic manner.  Not sure about this, but the Techs with their boots on the ground running around fixing things seem to feel that the corporate bigwigs don’t listen to their suggestions to improve their system.

In the meantime, the people in outlying locations (such as the mountains) who rely on Frontier for Internet service so they can enjoy email and Internet TV have to deal with frequent outages and phone calls to Frontier tech support for help in getting back online.  Rumors of Frontier’s possible bankruptcy doesn’t do much to inspire confidence.  If and when Frontier goes out of business, the government will likely come in and run it for a while, until some other company comes along and buys it up for a reduced price for damaged goods.  Meanwhile, all the Frontier customers are struggling to make the troubled system work for them.  Internet access has now become a necessity to modern civilization, not unlike roadways.

So: what to do?  Read on to see how this architectural firm finally appears to have resolved the main issues to obtain more reliable service:

This Architectural firm has been dealing directly with this issue for many years and most recently for the last 2 years in a new house project in western North Carolina.   They appear to have solved Frontier’s main problems in the following manner:

1.  OBTAIN A DIRECT-DIAL HELP PERSON WITH FRONTIER
This Architectural firm finally was able to obtain a helpful person, the same person, whom they could phone and have her send people to fix the problem.  This is much better than calling the main 800 help line and spending a long time listening to irritating Muzak while waiting to talk to a human.  This firm had to got through the President’s Office to obtain this direct help person.

2.  CHANGE BACK FRONTIER AUTOMATIC UPGRADES
From time to time, Frontier will upgrade service to customers thinking they are doing them a favor.  No they are not.  Recently, Frontier made a corporate decision to upgrade 3.0 to 6.0 Mb/s service to 6.0 to 9.0 Mb/s.  THAT CREATED A PROBLEM.  Why: because, as service technicians who came out to fix this misguided effort have informed the Architect: the small old wires in the ground and on overhead poles can only move so many electrons in a second.  In this particular region, service much above 3 Mb/s will inundate the wiring and overload it, resulting in dropped service multiple times per hour. When watching Internet TV, this becomes exasperating, having a movie or other program suddenly interrupted for what appears to be buffering, when in reality it’s like trying to run a lake’s worth of water through a small drainpipe.  It is important that Frontier service techs understand how to recalibrate their switchgear to dial down the corporate maneuvers to “upgrade” service.

3.  FIX ANY OPEN WIRING CONNECTIONS
From time to time, there may be exposed or aging wiring connections that are subject to a short, if moisture reaches them.  Recently, a technician discovered an open connection up on a telephone pole about 2,000′ from the new house experience Internet connectivity problems.  The tech solved this problem by sealing the exposed connections.

4.  MOST IMPORTANT: ADJUST SERVICE PLAN SPEED TO APPROPRIATE LEVEL
The final step to fixing this 2-year long internet connectivity problem at this new house was for the Service Tech to get the corporate office to adjust the speed plan for this service DOWN to 3360/863 (approximately 3.3 Mb/s).  As soon as this change was implemented, reliable Internet service was restored to the new house.  No longer is a lake full of water trying to be squeezed through a tiny pipe.  Or in this case: a world of electrons trying to be jammed through a tiny wire, too quickly.  The in-person service tech who finally solved this explained that we should never allow anyone else to change the speed of our service.  That could start the problems all over again.  And be sure to obtain the URL for your router in your house.  Check its speed if you are having trouble and report that to your service tech.  The magic speed for this house became 3360/863, as reported by Frontier’s software for the router online.

For now: after 2 years: reliable Internet service.  And even though places like Atlanta enjoy 100+ Mb/s, we are delighted to have a dependable 3 Mb/s.