This house has become the poster child for the latest movement in residential “hip” architecture: Industrial Style.

But this house, designed by Senior Staff Architect Rand Soellner of HOME ARCHITECTS, is the vanguard of Mountain residential architecture: blending the best of muscular Craftsman Style features with industrial materials in mountainous regions, like Cashiers, NC.  The above house is actually next door, in Sapphire, NC.  As soon as this house was built, suddenly there is a boom in shed roof, simplified houses in this area, obviously influenced by this first of the kind project in the region.

Why: the logic of Soellner’s design becomes obvious, once people visit the house.  For instance, the large, simple main shed roof allows the glass wall of the main spaces to be a large, simple rectangle.  And this means a glass wall larger than a billboard, taking in the gorgeous mountain view.  No other house in the region has this much glass width or height for the main view.  This provides more light and view than a gable roof, which cuts off the view on the top left and right corners substantially.  And the large shed roof costs less than a gable roof, which is more difficult and time-consuming to frame, clad and waterproof.  The simplest gravity flow roof in the world is a shed roof.  And when you clad it with standing seam metal, such as in the house above, you can reduce the slope down.  Soellner’s design has a 5* slope.  Just enough to get the rain, ice and snow off, but not too much (more and you would be wasting more investment on side and end wall materials and subjecting them to higher wind forces).

Other logical features of Soellner’s design include the mainly open plan arrangement.  “I designed our roof trusses to clear span the entire house, so the walls below inside the house didn’t have to support the roof.  That gave us more freedom to locate the interior partitions to complement our lifestyle rather than have structural needs dictate their placement,” said Soellner. (See below):

The Kitchen has double industrial appliances, which Soellner said only cost about $8,500 including those in the Laundry.  “Stainless steel remains hip, even after a century,” said Soellner, “And it can be easily cleaned and doesn’t damage with household cleaners, or chip when you drop a pan or utensil on it.”

The kitchen also features a super-cool industrial-looking old timber that Soellner picked up from a local junkyard.  Soellner first sprayed 3 coats of boric acid on it (to kill possible insects), then had it skip-sanded to knock off the roughest edges, then had it sealed with clear polyurethane and had iron bands installed, drilled holes and then hung it on long iron rods from ceiling trusses and had LED industrial light fixtures installed.  Everyone coming into the house gaze up at this industrial interior masterpiece in wonder and most say: “Wow!  That’s cool!”.   (see below):

This industrial timber “chandelier” provides much of the light for the open plan space of the interior.

Soellner located other LED light fixtures built-in throughout the house.  He said that LED lights only use about 20% of the energy of incandescent, so he only used LEDs in his own house.  He said the electrical usage of his company’s house designs sip energy.  He said his typical monthly power bill is usually only around $138, which is less than a smaller house his family used to occupy.  And LEDs are supposed to last 7 to 10 years before having to replace the lamp (bulb).  So that’s less maintenance.

He also super-insulated the house, with R49 batts in the attic and R30 in the floor, with a special low-cost liquid foam insulation in the exterior walls, that only cost an additional $1,500 more than batts there.  The walls have an R28, which is what his company calls their “SupR-wall“, because that level of insulation is so much more than required by Code.  Also, the wall system is super-tight, meaning that water and water vapor can’t get into it from the outside, so mold an mildew through walls doesn’t happen.  Most houses have chronic mold and water issues because their walls are not properly designed or constructed.  Not so with this one.

Soellner used a corrugated galvanized steel siding with a 40-year paint guarantee for about 70% of the exterior siding on the house.  “I didn’t want to have to spend $14,000 every 6 or 7 years to repaint my house,” said Soellner.  “So I used a material for most of the outside that won’t need to be painted for a very long time.”  Duh.  Makes sense.  It’s a wonder no one else seems to think this way.

And in terms of aesthetics, the house won a global architectural design award (ArCHdes2018) from the international architectural society ArCH (Architects Creating Homes).  So the use of industrial materials doesn’t necessarily mean that the project can’t be handsome in appearance.

“I think in terms of entire life-cycle costs for the houses I design,” said Soellner.  “If you have to repaint a normal house 8.3 times over a 50 year ownership period, and if the cost remains what it is today (around $14,000), then that’s $116,666 I just saved by using the siding I did on this house.  I’d rather use that money to take trips, pay for my health care, get new cars, and other things rather than dumping all that cash back into the house.  It’s all about making wise, durable choices that look good.”

And we all know that today’s costs are likely to double during the next several decades, so the $116,000 Soellner is talking about could very well become $232,000 over half a century.  That’s a crazy amount of money that most people are not realizing that their less durable “normal” houses are costing them in routine maintenance, because those costs are spread out over decades.  And then those people wonder why they can’t afford to take a trip to Europe, or get a new car, or help their children financially:

It’s because you didn’t have a good house design that could have saved you hundreds of thousands of dollars in maintenance costs over your lifetime!

A healthy house is important.  Did you know that most houses in this region (and many others throughout the USA and the world) have radon gas seeping into them?  And that radon gas is the 2nd leading cause of lung cancer in the world (after smoking)?  Well, this industrial style house has a radon removal system.  The EPA and CDC regards radon levels below 4.0 picocuries (4 pCi/L) as inconsequential.  Before the system installation, it was only 3.0 in the crawlspace, but the owners wanted it mitigated.  This house’s radon level is now nearly zero (0.7), one of the healthiest ratings in the entire region.  Probably about what walking across an open meadow would have.  Cost of the system: only $1,094.  Not many people think about this when building a new house: how the house can help you remain healthy.  This Architect does his best to draw their attention to it in his specifications.

And HOME ARCHITECTS is clever about the few other materials: they put those in your face as you approach the house, so you don’t even realize the house is mainly clad in industrial metal siding.

And the bold 2×12 rusticated timber horizontal trim with timber pegs in it, girdling the house at eye-level.

And the horizontal lap siding below that, going down to near-ground level (actually that is made mainly of cement, so it’s not likely to rot or burn).

And the special planter near the entrance with lush greenery.

And all the trim (wood, but PT (Pressure Treated) so it cannot rot and insects will not eat it).

So Soellner’s strategy is to mainly use materials (like the metal siding with the long high-end paint guarantee) ABOVE eye level (which would have been harder to paint), and then uses stone, horizontal siding and a rustic bold trim all at or below eye level so they are more of what you notice as you approach the house.

And by the way: the metal siding actually looks a lot like board and batten siding, which is what most people think it is, until the Architect informs them otherwise.

That’s a LOT of protection where you need it most: on your roof. Probably at least a 50+-year roof.  More like 60 to 100 years in reality.  And the hold-down fasteners are not through the metal pans (which are one-piece 57′ long sections with no overlaps).  These panels are secured with side-mount concealed clips and screws more often than code requires for this wind zone.  And the bottom end of the roof panels were bent in a sheet metal brake to fold over the bottom edge drip flashing, so water from the top of the panels cannot get back under the roofing.

And UNDER that miracle roof is WR Grace HT (High Temperature) Gold uncured butylene peel and stick sheets over the ENTIRE roof sheathing. All seams overlapped downhill and rubbed with a hard roller to insure proper seating and bonding. Now then, this Architect knows that the HT type of underlayment was required, due to the high temperatures transferred by the metal roof.  If this wasn’t specified, the underlayment might fail.  Just one more quality control piece of information having the right experience Architect brings to bear on an industrial residential project.  And on this simple shed roof, it can just about be guaranteed to have no leaks for the next century.  But under that amazing metal roof, forever comes to mind.

And under that, there is 5/8″ thick tongue and groove severe weather OSB, which uses a superior formula to resist wet conditions (even though with the above high-end roofing materials, the chances of water getting to this sheathing is very unlikely).  And this high-end roof sheathing was both glued and screwed to the roof structure below.  No nails used here.  Only screws.  Impossible to pull out.

And under that, there are the roof trusses, which the Architect had reinforced in the middle, with structural wood members and high-end screws, to make them stronger at their weakest point.

In other words: this house has one of the best roofs in the world.  And while the cost of the roof wasn’t cheap, it wasn’t significantly more than most roofs in this region, meaning: it’s all a question of having a Licensed Architect that makes well-informed choices for clients.

And here’s a look at the Loft Level home office, featuring about 60′ of counter, to help accommodate Merry Soellner, Real Estate Broker’s deals, which she can spread out in multiple packages. 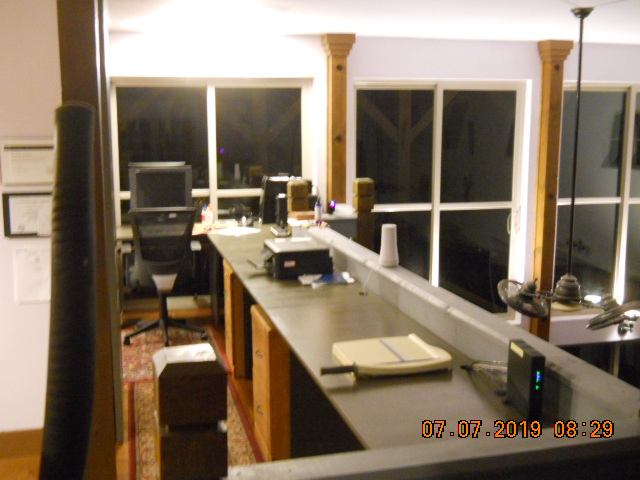 And the counters and support blade slabs only cost $193.  Material: MDF, painted with left over paint to match the cabinetry throughout the house, and 2 coats of polyurethane.

Because: one of the objectives of INDUSTRIAL STYLE is just not to “look cool”, it’s to save money.

So you see: designing an Industrial Style home is much more than mere appearance.  It involves a superior understanding of the components so they will last longer and with less maintenance.

Contact the Architect at the email address you see on this page to design yours.