Mold Mitigation and Waterproofing is about how this Architectural firm prepares drawings & specifications and conducts field work and helps find specialized Contractors to help owners solve their mold and waterproofing issues.

Basements and crawlspaces are usually where mold and waterproofing becomes a significant problem for many homeowners.  This Architect has been helping governmental agencies and homeowners solve their mold and “sick” building issues for decades.

Warning: this article will probably bore the pants off you.  Unless: you happen to have mold and/or water leaking into your basement and/ or crawlspace.  Why: because there’s a lot of technical issues involved with the causes and corrections of mold and moisture penetration.  And unless you happen to enjoy solving mysteries.  Because finding out what’s causing mold and moisture problems can sometimes be a mystery.  Although, it always has something to do with water intrusion where it should not be entering the building (or house).

Recently, the Home Architects ® company helped a homeowner in the Glenville, NC area to resolve her problem with mold and water intrusion.   The Architect is also designing the renovations for this 5,700 HSF (Heated Square Feet) house, which was built in 1981 (which his firm did not originally design).

Senior Staff Architect of the firm, Rand Soellner, ArCH, NCARB, said: “We see countless houses with these issues; it’s typical of aging residential structures.  The original Contractors were probably hammered to keep the original price low, so that Contractor likely used very cheap underground waterproofing on the foundation/ basement wall below ground, if he used anything at all.

And even if he used plain old asphalt, that has a radical molecule in its chemistry, that allows it to gradually mix with other materials, like H2O (water), so that degrades over time, until it’s hardly effective at all.  If an Architect had been involved he or she would probably have specified a quality product like polyurethane, specially created to be used underground and that would have lasted a lot longer and would have performed far better.  There’s this idea that some people have that they’re going to save money by not having an Architect, and all that does is make repairs that much more frequent and more involved, and therefore much more expensive later, than whatever the Architect’s fee would have been in the beginning.  Pay me now or pay someone else a lot more, later.  It’s really a lot less expensive to do it right the first time in construction matters.”

Soellner hastens to add: “If you don’t know what you’re doing, you can make things worse, or waste the Owner’s money.  We’ve been involved in this type of work since the early 1980s, so we’ve learned a lot about what works and what doesn’t and also some effective techniques to provide the most bang for the buck.”

In this particular circumstance, there is what appears to be a hollow-unreinforced CMU (Concrete Masonry Unit (concrete block)) wall about 12′ tall in a basement with earth over most of the height of the CMU wall.  In other words, it appears that only the 3/8″ thick cement mortar at the block joints is all that’s holding this wall together.  Curiously, there only appear to be occasional hairline cracks in the CMU, and not everywhere; only in certain locations, such as under point loads like girder beams.

And seemingly at random, at various places in the wall: some high, some about mid-level.  Some near corners, some along the main body of the wall.

And of course, having the original Plumber smashing out large amounts of concrete block in which to run his piping doesn’t contribute to the watertight integrity of the CMU wall. 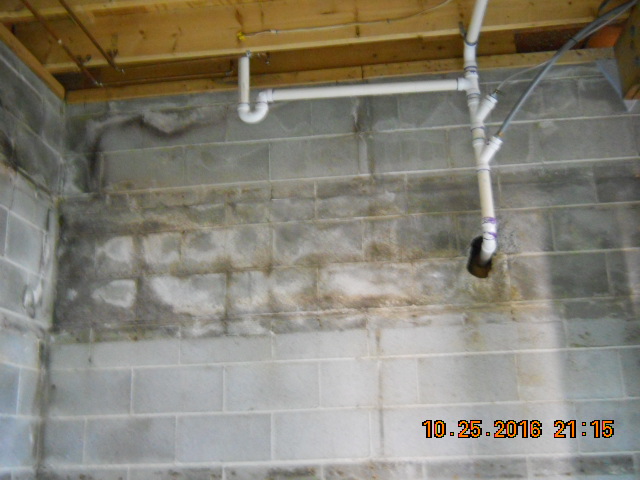 All of these conditions are being addressed and will be repaired. 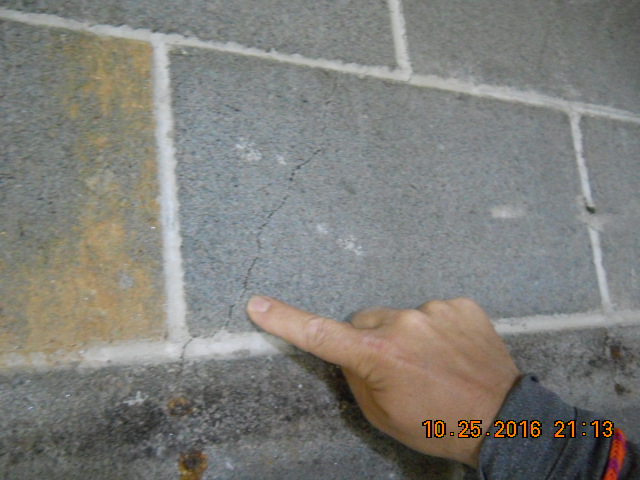 Interesting.  Why did the block crack here?  Hard to say exactly, but it seems likely that it may have been horizontal pressure from the earth on the other side.    Repairs need to address this and reinforce the block wall.

1.   PROJECT MANAGER ROLE: Architect was acting as the Client’s Project Manager on a fast track to solve the mold and waterproofing issue within a month, due to some purposes of the Owner.

3.  STRUCTURAL ENGINEER: a Licensed Structural Engineer has been engaged by the Owner (at the suggestion of the Project Manager- Architect) to come out to the project and assess the CMU wall issues and formulate solutions to reinforce the retaining wall so that it is stable.

4.  MOLD MITIGATION: a local mold mitigation company was engaged by the Owner, to fumigate the entire house, to kill  all of the mold on and in it.

5.  WATERPROOFING: the mold mitigation company was also skilled in waterproofing.  There is a special chemical waterproofing liquid that is being used on the interior side of the CMU, that is absorbed by the block, and a crystalline fill into all the pores of the wall that will transform it into a waterproof barrier. This is far less costly than digging up the earth around most of the house and redoing the waterproofing on the outside (how it should have been done in the original construction).

6.  RENOVATIONS/ NEW CONSTRUCTION: there will be additional interior demolition and new construction to handle the Owner’s needs and to further strengthen the CMU wall.

Some of the demolition phase of work can be seen in these brief videos: