Paving: Tar & Chip, & Asphaltic Concrete is about the various stages of paving and different surface and thicknesses and preparation.

The image above illustrates a tar spray truck.  The tar emulsion is about 365*F and is being sprayed over either new raw gravel substrate or over an existing asphaltic concrete surface that needs repaving and repairs.  The hot tar is sprayed first over the worst sections of existing road (if a repave), or over the entire gravel substrate if a new paving project.  If this is a repaving job, first the hot tar would only spray those specific areas that are the worst in terms of cracking.

#57 gravel (angular gravel of a mix of 1/4”, ½”, ¾” crushed gravel) would then be evenly applied from the rear of a controlled dumptruck rear gate as depicted below (only over the place(s) where the hot tar was just applied): 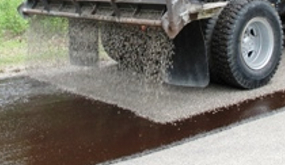 Then a heavy asphalt roller (possibly vibratory) would roll the gravel into the hot tar coating, resulting in a total thickness of about 1/2″ over the worst road bed areas (if we’re talking about a repave and repair scenario).

If this is instead, a new paving job, there would be a sub-base installed, which can vary, based on the conditions of the soil under it.  If the sub-base has a solid earth underneath it, #57 crushers run is often used by various State DOTs, usually 6″ thick and then rolled, then tack coat sprayed, then asphaltic concrete paved.

However, when dealing with a repave, we now need to instead run the hot tar spray truck over the entire road, thoroughly coating the entire surface, including the just-repaired areas.   Then, the gravel truck spreads finer gravel, such as #89 (a mix of 3/8″ to 1/4″ angular gravel) over the hot tar, then the roller presses the gravel chips into the hot tar.  The gravel chips may be crushed granite, which is a durable stone. 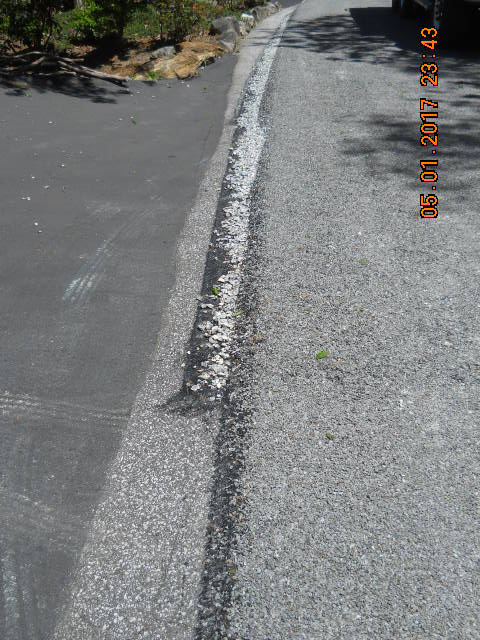 Here you can see just such an arrangement: the old existing paved surface has had a hot tar coating, with #57 gravel rolled into it, then another pass over these repaired areas and the old main road with hot tar, then the finer gravel rolled into that.  We’re now building up a reasonable roadway.

MANY EXPERIENCED PAVERS WILL TELL YOU THAT THIS SURFACE SHOWN HERE (CALLED “TAR & CHIP”) WOULD ACTUALLY BE A FINE, DURABLE AND FLEXIBLE ROADWAY SURFACE FOR MANY YEARS.  And they’d be correct.  This is the old school “Tar & Chip.”  Which consists of the various layers described above: mainly layers of hot tar with gravel rolled into it.  You may even see some state or County roads repaired or even initially paved in this manner.  The cost: about half what a fully hard-surfaced road using asphaltic concrete will cost.  So it’s worth a thought about what you really need. Especially if you’re thinking of paving a long country driveway. Having a more flexible surface might be just the thing to save your budget.

Okay, but the Tar & Chip road surface is rougher and flecks of the top layer tend to flake loose and fly around, hitting the lower surfaces of vehicles and washing away.  But what remains should still be good for a long time.

So what’s a more refined, smoother way to go?  That would be ASPHALTIC CONCRETE (what many people simply call “asphalt.”).  What happens to add this layer is as follows: you still need the sub-layers as described above.

Then the hot tar truck sprays a tack-coat which is hot tar, but not as much as for the previous gravel in the middle of the road, and heavier at the side 18″ or so.  Then, a special paving machine (one manufacturer is LeeBoy”) extrudes the hot asphaltic paving at various thicknesses over the tack coat (1-1/2″ is often considered correct, over the 1/2″ tar & chip, for a total of 2″ total), followed by the heavy roller to compact and consolidate the final paving.

Usually, dumptruck loads of hot asphalt (around 320*F or so) are dumped every so often down the street onto the tack coat, then front end loaders pick up those piles of hot asphaltic concrete and dump that into the LeeBoy paving machines. 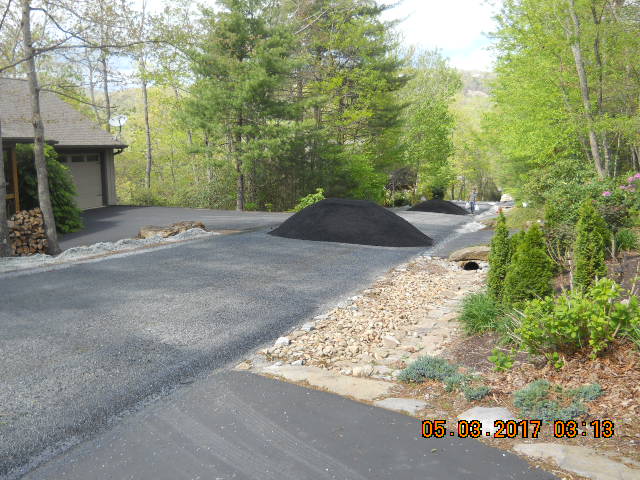 If a dumptruck happens to be in the right position with some hot asphaltic concrete, it may just dump directly into the paving machine, as shown below: 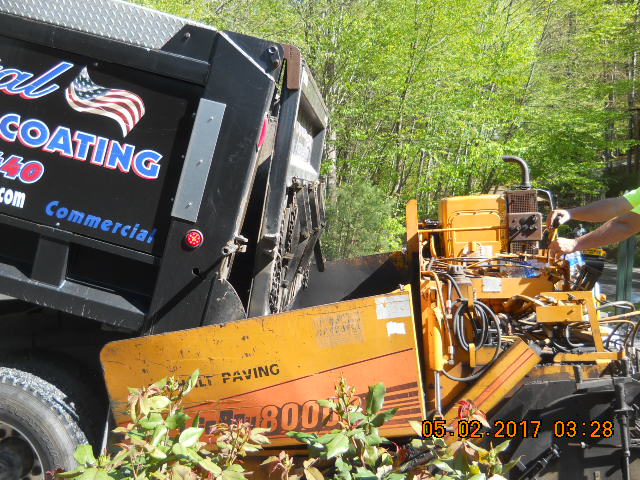 Note how the LeeBoy paving machine was engineered to be just a little wider than the dumptruck, so that the truck’s dumping load of asphaltic concrete doesn’t go anywhere else but into that big hopper.  The LeeBoy machine keeps the asphaltic concrete mix about 280*F as it hits the road (see below): 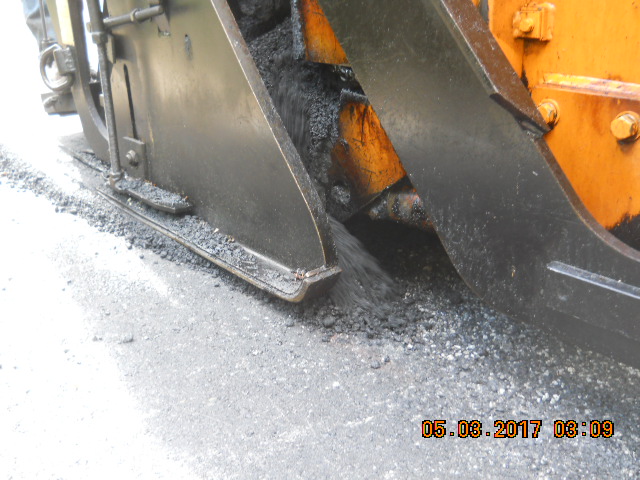 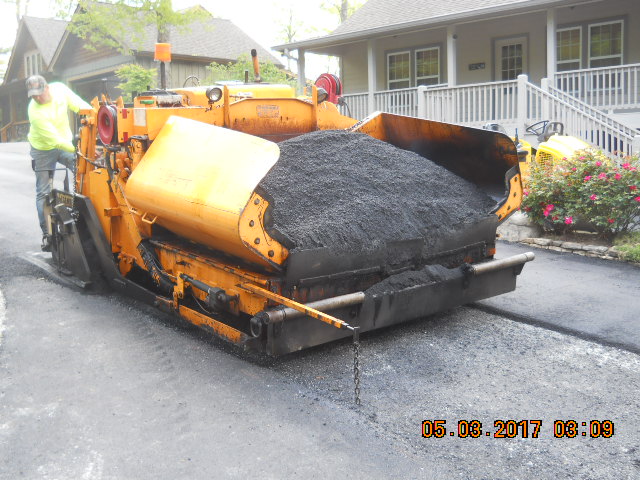 The even finer angular gravel used in the mix can vary, but for a very smooth road surface, this particular job used #9 and #10 (which are often referred to as screenings, crushed gravel smaller than about 1/4″ in size).  You see how each successive course of material becomes finer and finer until you have a smooth final surface?  Of course, the heavy roller compactors drive over the surface to compact and consolidate it.  And sometimes certain spot locations need reheating when dealing with things like manhole covers. 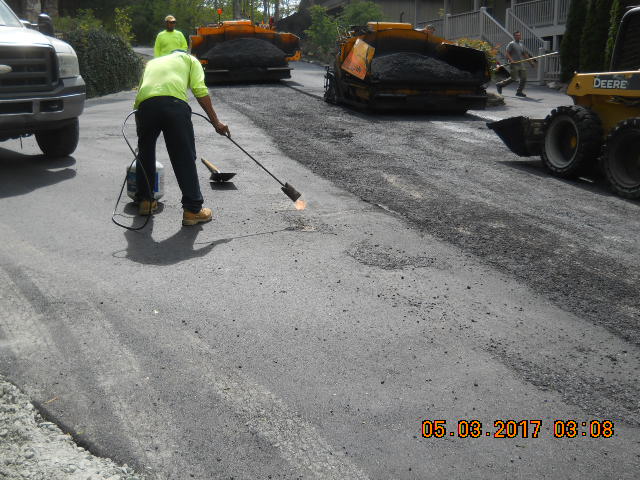 Before this final paving, often a couple of inches of #57 gravel is dumped all along the road shoulders, for about 18″ width, to give the road edges a bit of support along the sides. 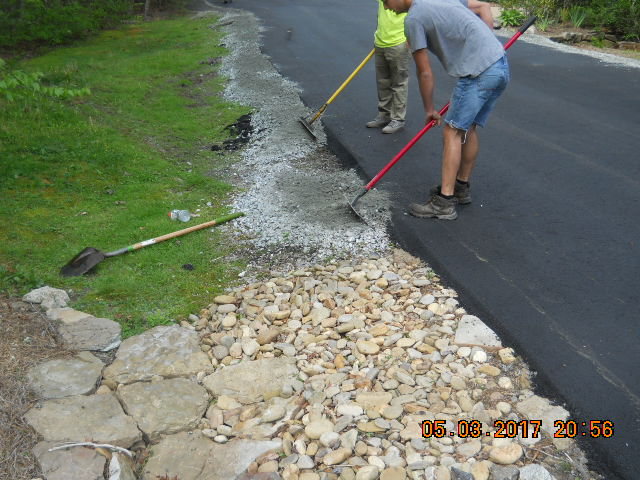 This usually requires hand & shovel work to scrape into final position (note: the larger, tan and beige landscaping rock is not part of the paving operation). 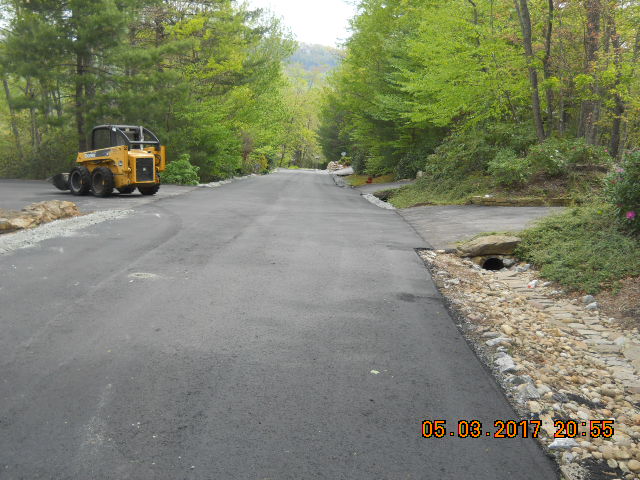 And so this brings us to the final, hard-paved surface.  Done.