Radon Mitigation for houses is one more reason residences are among the most complex project types for Architects and Builders. 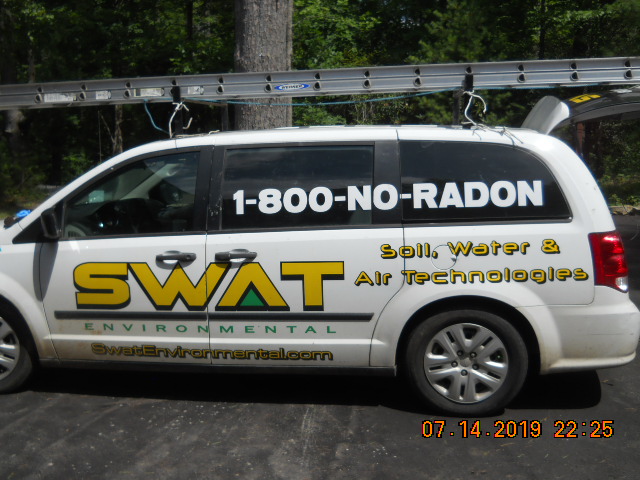 SWAT Environmental was assigned the radon mitigation for this particular house, by Merry Soellner, Real Estate Broker in Cashiers, NC.

Since this house won an international global Architectural Design Award in 2018, it was important that the Radon Mitigation system be as inconspicuous as possible.  SWAT did not disappoint, with Joseph, one of their most experienced technicians on this effort.

If you’re keeping track on this project’s step by step documentation, this is step 143.  So building a house, particularly in mountainous regions is not a simple task.  It’s a long, complex, carefully coordinated design and construction effort.

So what’s the deal with radon?  What is is and why is it important to get rid of it if it exists under your house?

Okay: The US EPA (Environmental Protection Agency) indicates that breathing radon gas is the 2nd leading cause of lung cancer, after smoking.  Radon is a naturally occurring radioactive gas that is inert, colorless and has no odor.  Radon, when dispersed rapidly, is of little concern.  But when it builds up in or under your house, it can kill you.  Venting the radon using exhaust piping with vent fans is the most common and economical solution.  Breathing radon over time increases your chances of lung cancer.  Only smoking causes more lung cancer deaths.  The EPA estimates 21,000 people die each year from radon-related lung cancer.  The EPA suggests that levels of radon higher than 4 pCi/L could be dangerous to your health ( 4 Picocuries per Liter).  Radon is formed by the natural radioactive decay of uranium in rock, soil and water.  Unless you test for it, there is no way of knowing if your house has it.  Tests are downright cheap.  Low levels of uranium exist widely in the Earth’s crust.  In other words: you may have it under your house.   It is found throughout all 50 states in the USA.

Once formed, radon moves upward through the ground to the surface, into your basements and crawlspaces and up into your house.  Kind of creepy, isn’t it? The EPA indicates that no level of radon is safe, however, 4 pCI/LL is a realistic level that can be achieved with economical technology and the risk is lower once reduced below that level (but not entirely removed).

Many homes in mountainous areas, like along the Appalachian Mountains and Rocky Mountains have crawlspaces under the houses due to the uneven terrain.  These crawlspaces are ideal places to install the radon mitigation exhaust piping.  The best system would be to install the vent piping UNDER crawlspace encapsulation membranes (often a thick vinyl or polyethylene plastic) that help reduce the amount of moisture in the crawlspace air (and therefore in the remainder of the house above).  Then the exhaust piping (often 4″ diameter PVC) is passed through a bored hole in the rim board of the floor framing to the outside, then turned upward into an exhaust fan housing, secured to the exterior wall, then run up past the top of the roof, where the lighter than air radon gas can be dispersed into the general atmosphere harmlessly beyond the level of occupation in the house.

Alright, so how do you go about having radon removed (“mitigated”) from your house.  If your house is under construction, your Architect and Builder can suggest you contact a Radon Mitigation company, who will take the steps indicated below.  If your house already exists, your Real Estate Broker or others may also suggest you contact a Radon Mitigation company.   They will take the steps similar to the following (if you have a basement with a concrete floor, the solution will have some similarities, but there will be different techniques involved).

In this case, we found a point to the side of an HVAC floor register (under the window) in the crawlspace and aligned it

under the wooden vertical left side jamb window trim, so will be a nice hard wooden surface (pressure treated) where screws can be installed to secure the exhaust piping into place.

2.  Your Radon Mitigation technician runs a solid exhaust pipe to a point where it will pass under the crawlspace moisture barrier (in this case, a nice 20 mil polyethylene encapsulation), then slits the moisture plastic and installs a perforated PVC pipe through that for about 10 feet or so.  Then he seals the vapor barrier back over the top of the perforated radon exhaust pipe with quality tape (in this situation, they used Gorilla Tape), so the PVC pipe is creating a suction under the vapor barrier, drawing that radon-laden air to the vertical exhaust pipe, then horizontally outside the house, then into the fan housing outside.  That effectively removes the radon from the house interior. 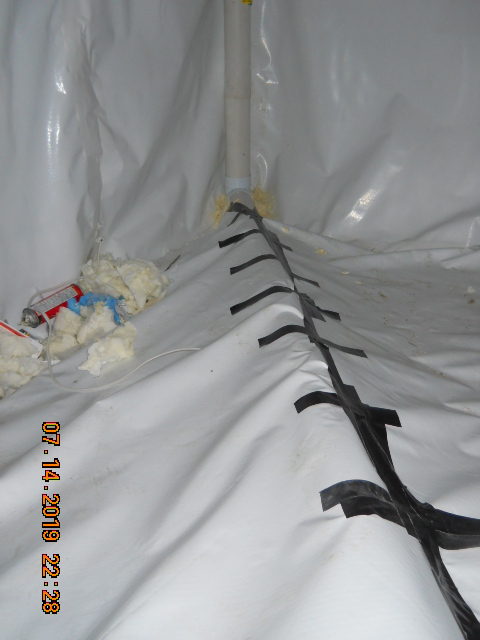 3.  The radon tech now installs the exhaust fan to the horizontally exiting pipe, then turns it vertical.

On this project, the piping was spray painted dark brown, to blend with the exterior colors of the house. 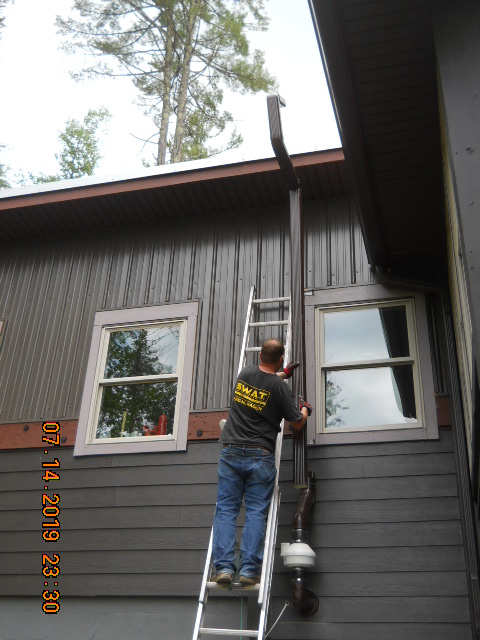 The previous planning regarding where to install fastening screws now comes in handy.

5.  Final electrical wiring connections from an interior GFCI (Ground Fault Circuit Interrupter) convenience outlet in the crawlspace to the exhaust motor housing outside.

If you move your eyes around the house, this radon removal system is not very obvious to the untrained eye.  More like a normal downspout.  May come back and spray paint the motor housing brown also.  Note how the Architect had the Tech install the top part of the exhaust so that rain cannot easily enter, and the exhaust air pressure should also keep out insects.  Evenso, the Architect-Owner is considering getting some insect screen and a zip-tie and installing that up there.   A nice, clean job by SWAT, in association with the Owner-Architect and Real Estate Broker.