Well, no one said this blog doesn’t get into detailed technical issues from time to time.  And here’s one: how your residential community water provider maintains your potable drinking water supply.  If you have a well, you can probably ignore; but then again, maybe not.

This online article has much to do with piping materials used underground, so that could probably apply to anyone that has underground clean water serving their home and that probably means 99.99% of people, even those in highrises.

Okay, so what’s this all about?  In a nearby location, we recently noticed the street being dug up and about 5 guys working.  We came to discover that this all started when someone noticed water bubbling up right through the street!  How odd.  Proof positive that asphaltic concrete is porous.  After contacting the local office of the potable water utility company, several trucks were dispatched to see what was happening underground.

1.   A construction man used a can of red spray paint to identify the general rectangular location of the problem area.

3.  Then a guy used a concrete cutting saw to cut right through the street paving (about 1-1/2″ thick it appeared to be).

4.  Then a fellow moved what appeared to be an older model John Deere 75D trackhoe excavator into place, let down his hydraulic bracing arms and proceeded to dig a rectangular hole into the street (see photo). 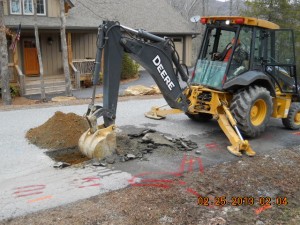 5.  Then guys took turns hand digging using a shovel, and they eventually found the potable water main.  It appeared to be Schedule 80 PVC, but we couldn’t be sure.  Off the right hand side, was a main tap for a lateral line of blue colored older piping, perhaps 1-1/4″ in diameter. 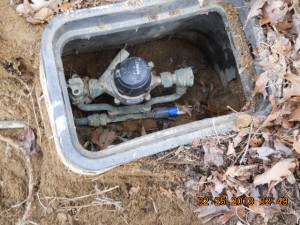 6.  One of the workers explained that this older blue piping, which had evidently been in the ground for about 20 years or so, becomes brittle; he believed it to be polybutylene, which as some of you may know, had class action lawsuits over its use for water piping, because it frequently failed, resulting in water damage and non-functional plumbing piping.  Big mess.  No longer used in most locations.  The worker bent the pipe to illustrate how stress lines appeared when it was deformed.  Evidently PB (or PolyButylene) exterior piping was blue and interior was typically grey.  It failed typically due to oxidants in public water supplies, like chlorine, that reacted with the PB piping and acetal fittings, causing them to become brittle.  Micro-fractures result, and the structural integrity of the system is reduced and can fail without warning.  SUCH AS HAPPENED HERE.  All the piping was still connected, but this lateral line was gushing water at its point of connection, therefore, the fitting-to-piping connection did fail.  So if you see any grey piping inside your home or blue underground piping outside your home, watch them carefully and monitor them for signs of leaking.  90% of all PB system leaks occur at the joints in the piping as happened here.  PB piping was used as water supply piping from 1978 to 1995 and was continued to be installed through 1998, due to existing inventories.  About 20% of all homes built during that time span has PB piping and communities having underground water supply piping installed during that same period are likely to have a similar distribution, such as was the case here.

7.  Then the workers removed the culprit: the aging blue polybutylene piping from the main line,  then they disconnected the entire blue pipe lateral that connected to two existing water meters serving two nearby homes.  Note that on the left side of the water meter that is where the aging blue PB piping was, and on the right of the water meter, the plumbing contractor that piped this 2010 new home appears to have used modern schedule 40 PVC piping.  The bright blue at that pipe’s connection is the solvent and pipe glue used to connect it to a mechanical plastic fitting that secured it to the brass fitting on the water meter.

8.  Then the workers brought out a big black coil of new plastic water pipe tubing.  See photo.  After looking up the ASTM-D-2737 number, that is polyethylene piping, which, according to the workers, is much more flexible and less inclined to have problems with community water systems.  Evidently the polyethylene does not have the problems of brittleness that the old PB systems had with chlorine and similar chemicals.   What was interesting was the method of placing the new lateral piping.  They did not dig a shovelful of earth.  They installed a stainless steel cable to a fitting and secured it to the end of the new black tubing, then ran the steel cable through the old blue PB now empty water pipe, then the Trackhoe grabbed this cable and slowly yanked it sideways, pulling the new black tubing through the old blue tubing, in effect using the now-defunct old water pipe as a conduit through which to pull the new water pipe, in a matter of seconds.  Very clever.  This cut several hours from the repair work.  The workers then hooked up the new black piping to both the water main and the 2 water meters.  Repair done.

9.  The John Deere fired up again and filled in the hole in the street.  All the trucks and workers left; a job well done.

Moral of the story: if you see old blue underground water piping attached to your water meter; particularly on the community side, monitor this connection and the one that is out at the street underground.  You may see water bubbling up some day.  Call your utility provider and they will no doubt make similar repairs to those outlined above.  Live and learn.

For assistance with your house’s maintenance and renovations and new residential design, do not hesitate to contact an Architect:  Rand@HomeArchitects.com