There is presently no building code requirement for you to have a portable fire extinguisher in your residence.  This is a requirement (per NFPA101 & NFPA10) in commercial structures. 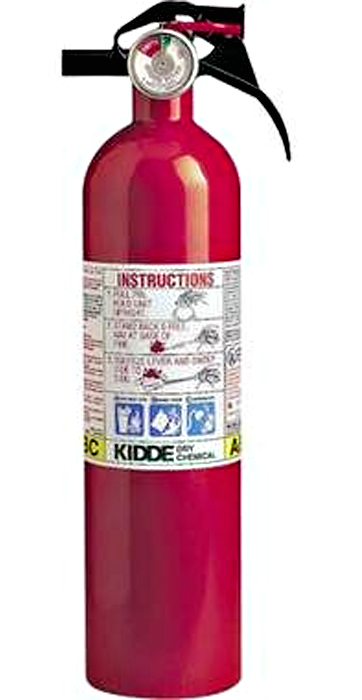 IRC (International Residential Code) does include a provision for new homes to have an installed, permanent fire sprinkler system, however, many jurisdictions have not yet adopted that provision.

Having a house designed built just to “minimum Code” does NOT guarantee a safe, durable and healthy place in which to live.  Click here for –> more information about minimum Code requirements and what they mean.

In the current IRC edition (2012), Section R313 calls for automatic fire sprinkler systems.  However, all states have the right to amend these codes, which are published by an organization called ICC (International Code Council) headquartered in Washington, D.C. , which has been in existence since 2003.  Most states throughout the USA have not yet accepted that provision, because it has been discouraged by such organizations as the NAHB (National Association of Home Builders), due primarily to concerns about the added cost this will add to the construction of a house.  And this is a valid concern.

Part of the answer, while states, code organizations and other entities squabble over this issue is: to take matters into your own hands and provide your house with PORTABLE FIRE EXTINGUISHERS.   Unlike water, which is used as the fire suppressant in fire sprinkler systems, portable fire extinguishers use a combination of chemicals.  The HOME ARCHITECTS suggest that the only sensible choice for a residential (and commercial) portable fire extinguisher is an “ABC” combination type, which can handle many types of household fires.  According to Kidde (a leading manufacturer of portable fire extinguishers) an ABC extinguisher contains a multipurpose fire-fighting agent.
Class A: deals with fires involving common combustibles such as wood, paper, cloth, rubber, trash, and plastics.
Class B:  fires involving flammable liquids, solvents, oil, gasoline, paints, lacquers and other oil-based products.
Class C: fires involving electrical equipment such as wiring, controls, motors, machinery & appliances. 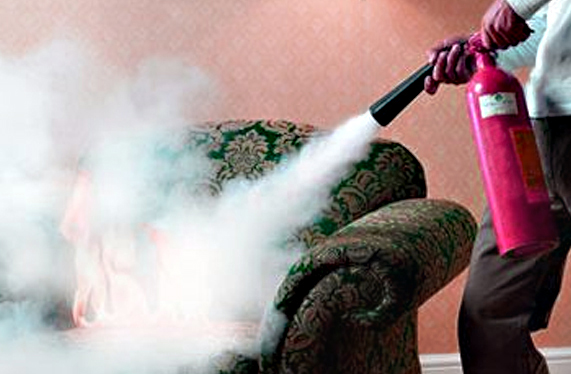 Senior staff Architect, Rand Soellner, ArCH, NCARB, LHI, thinks it makes no sense to try to pick and choose where a Type A, Type B or Type C extinguisher would need to be located to fight specific types of fires (in a house).  And in a panic situation, with, say, an arc-fault at an electrical receptacle that ignites a nearby curtain, you aren’t likely to behave rationally and say “Let’s see now…where do I have the type of extinguisher made to fight an electrical fire… and hey: I’ve got a burning fabric here, too… And is that an A, B or C?”  Better to have a combination foam fire chemical that can safely handle most types of fires you might encounter.  That is his approach, whether designing a State office building, theme park or custom residence for his clients.  There may be some debate on whether or not a cooking fat fire might be better handled by a Type K fire suppressant, but it has been this Architect’s experience that it is hard enough convincing residential clients to obtain and place the ABC extinguishers, much less complicating matters.  And the Type B fires involving flammable liquids and oil are supposedly handled by the B-type fire suppressant, contained within the multi-purpose chemical.  If you really want to be certain, of course have a fire marshal visit your house and advise you on exactly what type of fire suppressant you should have where. 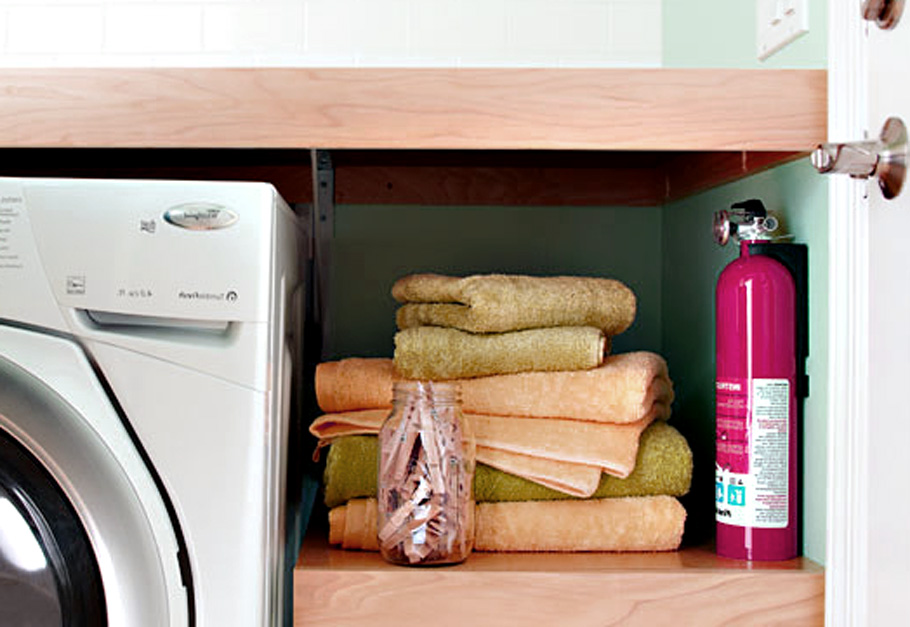 However, for most people, even having a single ABC extinguisher anywhere in the house is a major step forward in safety.   Soellner has never seen any other firms indicating on their residential design documents where to locate fire extinguishers.  Having done it as a matter of course on his commercial projects, he believes it is a prudent practice on residential designs as well.  “The way I look at it is: I’m protecting the life & property of my clients,” said Soellner, “An Architect should deliver sensible, wise and value-oriented solutions like this to keep their clients safe.”

His company, Home Architects ®, often includes the requirement on their Floor Plans, of locating several 2ABC size extinguishers, each of which might weigh about 7 pounds, fully charged. Technically, this is a 2-A: 10-B: C extinguisher.

In commercial projects, this Architect often used 4ABC extinguishers, which might weigh 10 pounds, according to Kidde’s product information. And in larger commercial facilities, Soellner might use up to a 20ABC portable fire extinguisher (technically: 20A:120B:C), which might weigh about 32 pounds.  Nothing larger, because if these become too heavy, it could be harder for smaller people to handle comfortably in an emergency situation.

A residential grade 2ABC might be adequate to handle a small fire (depending on your definition of that), and certainly can handle a larger fire than a 1ABC extinguisher, which is smaller in size.  Some people have criticized the 1ABC, as they are so small that they will not last long and may be of little effect in a medium-sized blaze.  The discharge time for smaller extinguishers will only be between 9.5 seconds to about 28 seconds, according to Kidde’s product information.  The effective distance from you to the fire might be somewhere between 10′ to 35′, depending on the size of extinguisher, according to a product chart in Kidde’s product guide.

So where does this architectural firm indicate the location of portable fire extinguishers in their designs? NFPA (National Fire Protection Association) recommends at least one primary protection fire extinguisher for each level of the house.  However, this architectural firm’s experience is that this rarely provides the level of safety that having more, in strategic locations with varying degrees of fire risk can provide.  NFPA does suggest having extinguishers within 40′ travel distance and that’s good idea (once again, Not required by today’s residential building codes).  They also suggest adding supplementary protection by having 1ABC (technically: 1-A: 10-B:C) extinguishers in bedrooms and other areas, which is a very good idea.  This firm is not sure many people will actually do that, however, no matter how good of an idea that might be.

Here’s a nice little video made by Kidde to help you understand where portable fire extinguishers are a good idea: Fire Extinguisher video.

This architectural firm typically indicates portable (wall-mounted) fire extinguishers in the following types of rooms and spaces:  Garage, Kitchen, any workshops, near stairways, sometimes in master bedroom suites, depending on layout, and any other space that might have added risk, and yes: at least one on each level (usually more).  They try to locate the extinguishers in logical places and are unobtrusive, but where the owners can easily reach them.  Also, often near an exit, so you don’t have to be in a more interior area to access the device.  They also specify that the owner is purchase and install the extinguishers (unless the owners wish other wise) to avoid markup on these devices.

How long do fire extinguishers last?  Kidde indicates that their units can have a 6-year limited warranty for certain models.  You certainly want check the charge reading at the top of your devices from time to time and either have them recharged or replaced to insure that you are ready to deal with a household fire.  First and foremost: if the situation is not something with which you can deal: get out of the house and call the Fire Department.  Have the closest fire department on speed dial on your cell phone; you may be glad you did.

If you want to have your house evaluated, contact an Architect familiar with extinguishers and discuss with them their providing this life-saving professional service for you.  Click here for–> more reasons for an Architect to design your house.