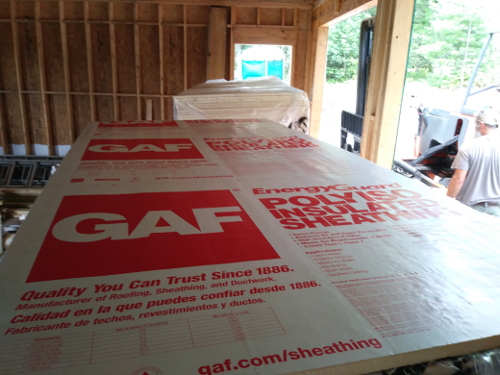 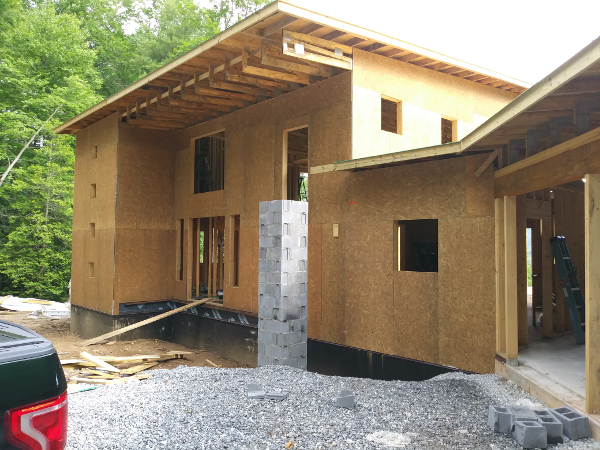 So, what is Thernal Wall Insulation?  We’re using a GAF Polyiso with foil backing.  This means polyisocyanurate.  It has an R value of around 6.1.  There are other types, such as Styrofoam (Dow), which is blue, and nearly identical XPS (Owens Corning), which is pink.  These have an R5.  All Thermal Wall Sheathing in this article are rigid foam panels 1″ x 48″ x 96″.

This Architect likes T&G (Tongue and Groove), but as of today’s date, only the Dow and Owens Corning appear to offer that option.  And only the Polyiso panels offer a foil backing (GAF, Johns Manville), as far as this firm is aware.

Shrinkage and Contraction: Building Science Corp. States what should be obvious: all building materials contract and expand based on the temperature around them.  That’s normal.  The panels may expand 1% to 2%.   If we accept 1%, then that means these panels could shrink and expand 1/2″ (horizontally) to 1″ (vertically), if the panels were initially installed at the midpoint of the temperature cycle.  This means that the T&G feature may turn out to be useless (unless all of the panels shrink and expand with each other (for which one could make a good logical case).

And it becomes crucial to have installers use a chemically compatible flashing tape at the horizontal joints as Z flashing, starting over the face at the top of the panels (at the top of each course), over the top of the panels, then up the Structural Wall Sheathing.  If everything stays in place, the idea is that this Z flashing prevents water that comes into the wall from penetrating further past the Thermal Wall Sheathing (at the top and bottom).  If the panels shrink or expand, the idea and hope is that the flexible and sticky Z flashing remains in place, doing its job.

At vertical joints, on one particular project, the Architect is using foil tape vertically over the face of the panels.  Once again, the idea and hope is that if the panels shrink or expand, the tape will remain in place, keeping water out of the joints.

Now then, there may be some thought about whether or not the applied tapes will stay adhered to the foil backed polyiso panels.  Good question.  But it isn’t as if the tape is staying warm when the polyiso is cold, and vice versa.  In other words, the tape should be subject to the same shrinkage and contraction that the polyiso panels are experiencing.  So, it makes sense that the tape, whether the adhesive remains bonded to the panels or not, will likely remain in a position of water resistivity.  For instance, some builders might just use a few inch ribbon of polyethylene as the Z flashing, with no adhesive backing whatsoever.  And it will still shed water.  So, the added feature of high quality flashing tapes like ZipTape and foil tape should simply be added insurance over that homespun solution.

The above is a logical evolution of the old-fashioned WRB (Water Resistive Barrier) nailed over the wood sheathing.  And the oldest is 15# asphaltic felt over the wood sheathing.  There’s really nothing wrong with that.  Asphalt impregnated felt works well.  And after that, came TyVek, which this Architect is not fond of: it can trap water behind it and doesn’t really seal much where nails and screws penetrate it.  But neither one of those incorporates CI (Continuous Insulation), which the exterior Thermal Wall Insulation does.  And this offers a distinct advantage over previous systems: better wall insulation, along with the water resistive barrier, which is also an air barrier (when taped).  The house becomes much tighter than ever before.

But then again, this latest combination of thermal insulation rigid foam panels with foil backing is water resistive (<1% water absorption), but doesn’t allow the wall to breathe /dry to the outside (because the perm rate is <0.3.  And that may not necessarily be an issue: as long as the interior of the wall system lets construction moisture to dry inward, there should be no problem.  Just never use polyethylene as the interior vapor barrier over the interior side of the studs.

BOTTOM LINE: this new system of continuous rigid foam polyiso with foil backing and taped joints (including Z flashing at head joints) is probably one of the most effective wall sheathing systems at the present, when overlaying standard OSB wall sheathing.   The foam panels should be installed vertically (so there are fewer Z flashing head joints) and all of the thermal wall panel joints should be offset from the wall sheathing joints (never on top of each other).  This will aide both in air blocking and water penetration resistance.   If this is all done properly, utility bills should be lower and comfort higher.

If you’ve been paying attention  you’re probably understanding this is all very technical and very important.  Contact an Architect that knows what’s he’s talking about.  Shaving hundreds or thousands of dollars a year off your utility bills might come in handy, along with keeping water out of your walls.