Timber Frame is a system that has been on this planet for thousands of years.

Timber Frame is a system that has been around since mankind began chopping down trees.  How long ago was that?  10,000 years?  30,000?  Then this Neolithic (or Stone Age) person stood these logs back up and attached horizontal logs (a round timber) on top of 2 other vertical posts (round log uprights) to make a Frame of Timber, or timber frame.  Doing this multiple times and in a fairly regular sequence created the basics for making a timber frame house or other structure using a crude timber frame technology.

(C)Copyright 2010 Rand Soellner, All Rights Reserved Worldwide.  Anyone is hereby licensed to copy this article in its entirety, including copyright notices for informational purposes.

the “wattle” which was used as the infill of the timber frame for thousands of years. Photo courtesy CC 2008 Richard New Forest. 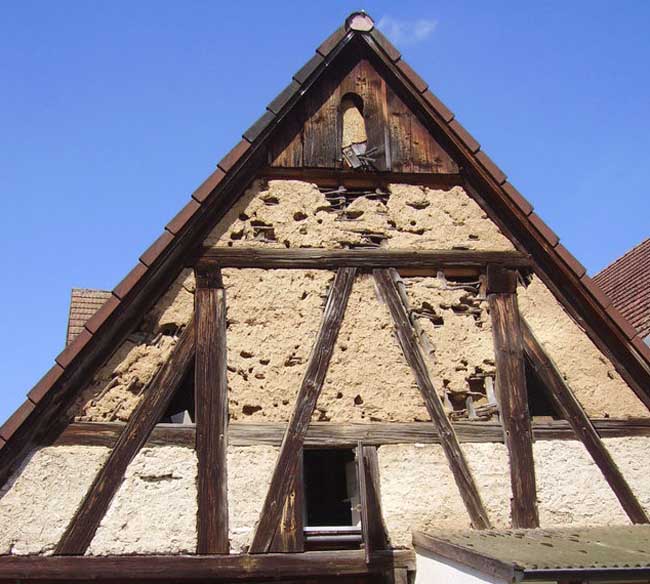 That is still fairly breezy when the wind blows, so now, one must Daub something over the wattle, hence the term: Wattle and Daub.  If you really wanted to do it this way today, you would likely daub with some elastomeric mortar-like material with flexible and permanently sealing characteristics.  Back 6,000 years ago they use all sorts of unpleasant materials, whatever was lying about, like dung, soil, mud, chalk, crushed stone, and other materials.  Hair and straw was used as a historic binding agent to give strength and contribute to a more flexible mixture.  This changed over thousands of years to become mortar-like mixtures.

Today, wood stud walls are used or other wall panels like SIPs (Structural Insulated Panels) between or on the exterior side of the timber frame, then these are sheathed with modern materials like plywood, gypsum board derivatives, and engineered sheets typically measuring 4′ x 8′, which are then nailed or screwed to the studs, then weatherproofed and then skinned with an exterior siding material like wood siding, stone, clapboard, shingles or whatever the homeowners desires.

Timber frame systems today are primarily selected because of their aesthetic appeal.  They are not inexpensive.  They are beautiful.  They allow for reasonably intermediate to long spans in residential construction and in other structures like modest churches and upscale smaller office buildings.  Timber frame structure do have some built-in burn resistance to the charring that typically occurs when timbers are subjected to flames.  Even so, timber frame buildings are made of wood and are ultimately combustible, so there is a limit to how large of a commercial structure can be built with them, although it might surprise some people at how large the building codes allow architects to go with a timber frame system.  Some recent fires and the resistance of timbers, after their initial charring have led some jurisdictions to re-evaluate heavy wooden structures and possibly expand their usage.

What is so appealing about heavy wooden systems in residences?  They are art.  The manner in which experienced fabricators assemble the wooden members is artistic.  It is like living inside a piece of art.  The curving bracing and bracketry adds interesting detail to the vertical posts and horizontal beams, elevating it into the world of art.  There can be arches and other heavy wooden members that are nice individually, but when viewed as an entire system; it becomes spectacular.  It makes the Soellner firm think of a single piece of wood as a note in a piece of music, and the completed entire structure as a magnificent symphony.

Some custom homeowners request that their architects design their homes as timber frame residences.  This is one of the most prevalent uses today of timber frame systems.  Rand Soellner home architects designs homes and castles these days using timber frame technologies to suit their client needs, such as for the mansion depicted in the nearby photo.  Timber frame homes have a sense of permanence and strength that is immediately recognizable.  They feel like they might be around for a thousand years, and they might.