Looking Back on a Century

United State Home Architects have a knack for designing interesting homes that people want all over the World.  This article is about a focused segment of that market: how United States Home Architects have changed over the decades and what has influenced them, specifically, one of the designers for one of Frank Lloyd Wright’s main apprentices and his journey into becoming a custom home architect. 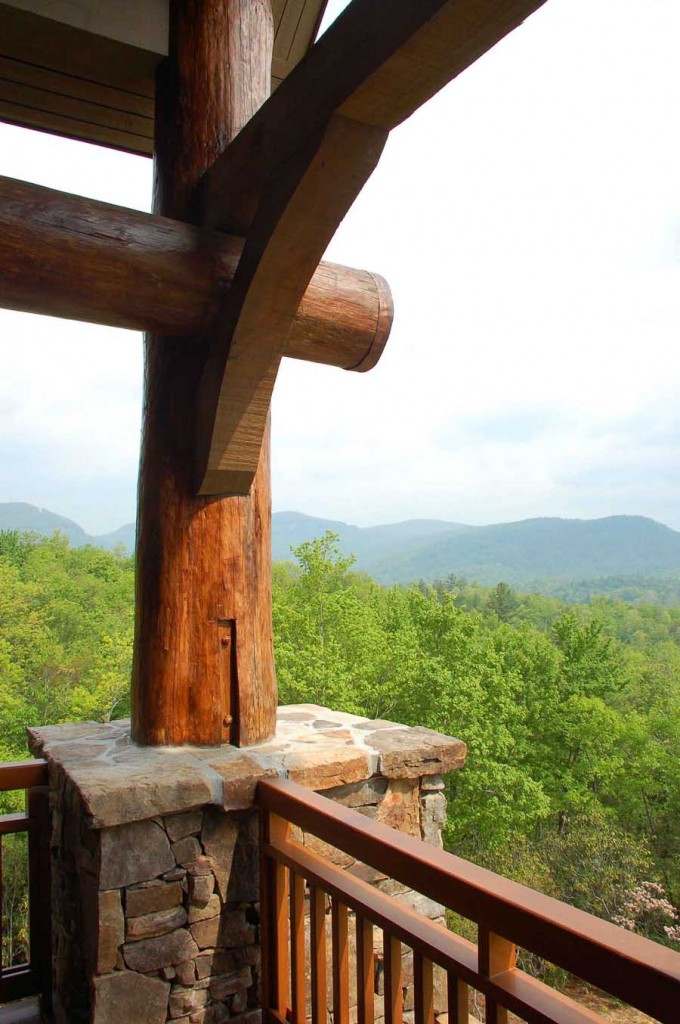 One of the world’s leading home architects, Rand Soellner, AIA/NCARB, himself one of the United States Home Architects, said: “It took me a half-century to figure out that what people want for nice custom homes is not what I had been taught to give them in architectural school.”  Rand points to some older designs of his that were ultra-contemporary, even futuristic.  “When I was attending college and graduate school to obtain my undergraduate and Master’s degrees in Architecture, we were told that ornamentation and texture were evil; that to produce something great, you had to make it slick and smooth and boxy, like Mies Van Der Rohe (a German immigrant to America, famous for his BauHaus (1919-1933) works), Oscar Niemeyer and LeCorbusier’s larger projects.

Even some of Frank Lloyd Wright’s earlier projects were scoffed at by professors, as being too fussy and employing too much texture and decoration.  Personally, I really enjoyed all of Mr. Wright’s work, he was one of the genuine United States Home Architects, even though I might disagree with a particular design solution here and there.  By the way, my university training was excellent; the design professors simply had their preferences, as do we all.  They were United States Home Architects as well.” 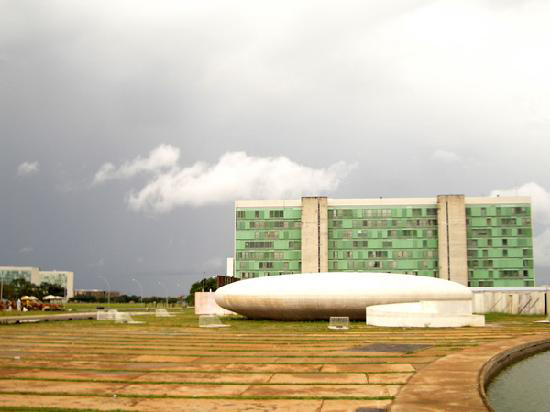 Let’s take a look at some work of those architects who influenced so many of us.  One happens to Not be part of our United States Home Architects, but he did help influence a generation of architects back then, me included.  Oscar Niemeyer.  He was revered as a near-god to architects back in the Mid-20th Century, because he obtained the much envied role as the architect for a new city: Brasilia, in South America’s Brazil.  He designed a new capital city out of his austere style of concrete architecture and his facilities are true engineering marvels.  Unfortunately, Brasilia isn’t working very well on a social level.  His enormous concrete courtyards don’t have the intimacy of more huddled and more textured places in Old Europe and people just don’t really want to be there.  The main reason it works at all is because it is a center of government and governmental funding keeps it going.  It also doesn’t work economically for the common citizen and a servant-class of people have to commute there to tend to the more mundane tasks to keep the town running.  Don’t get me wrong, I am as guilty as the next guy; I loved Mr. Niemeyer’s work at the time and thought it was the New Age. I was wrong.  I was a student and was absorbing what professors told me was good.  I lived through this and used to design this way, so I have earned the right to assess reality and then rebel.  In my opinion, United States Home Architects need to be more organic: to have roots to the ground on which homes and buildings stand and look like they grew there, rather than were so many building blocks on a table.

These days, I think more for myself.  I listen to my clients and what they say is good for them.  What my clients tell me is that they want what I design these days.  And what is that?  I design nice mountain homes with plenty of bold textures like boulders and wood and bark siding and Arts & Crafts bracing and bracketry.  In a nutshell United States Home Architects should be incorporating these features: warmth and a direct connection to the environment.  My mountain homes look like they grew right out of the granite bedrock on which they stand, with large window areas gazing across mountain valleys to ancient cliffsides.  My work is now timeless and devoid of fads.  I started changing when I worked for one of Frank Lloyd Wright’s main apprentices (yes, one of his main 12).

I learned about the philosophy of Organic Architecture and View Systems and how houses should look like they grew there.  What a great idea!  At the same time, I forced myself to re-examine some of Mr. Wright’s iconic and most revered buildings and homes, to learn from his work. 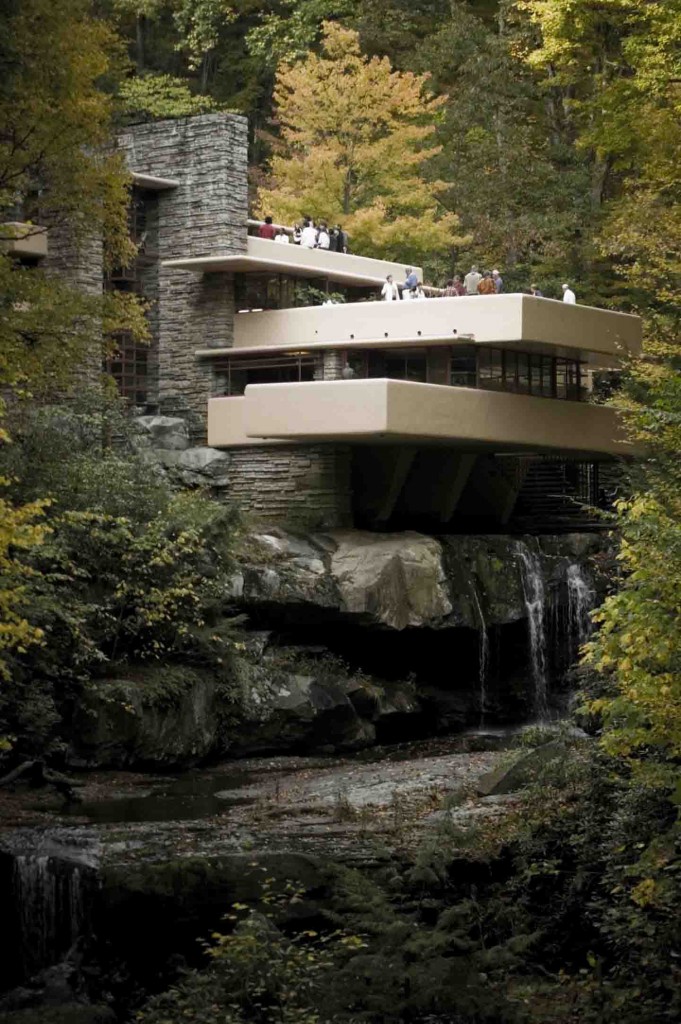 (Collective gasp from 99% of the architects in the USA) What fad?  Mr. Wright was aging and falling out of favor back then; he really had a rocky career; he was looking for ways to improve his standing in the World.  At that time, the ultra-contemporary International Style with broad bands of white concrete were really popular, so guess what?  Mr. Wright used those for the side walls of his outdoor decks on Falling Water, and their austere simplicity was a breathtaking contrast to his rugged stone towers.  Beautiful in terms of pure Art.  But…how about functionality?  Had Mr. Wright not been so concerned about his popularity and influenced by others whom he perceived to be passing him (of the “International Style” back then), I would have hoped that he would have used some sort of Wrightian-style railing system that you could see through.  The big bold bands of concrete look nice, but when you are sitting down on the deck or in the house, they block your view of the beautiful site, and especially of the waterfall for which the house was named!

I realize I’ll probably be criticized by my brother architects for pointing this out, for questioning something from an architect of nearly sacred and messianic status, but it’s true: you can’t see through a solid concrete parapet wall.  Unfortunately, these very heavy parapet walls also have been a source of trouble and expense for restoration architects, as if they are trying to tell someone that they really shouldn’t have been there in the first place.  The floor slabs on which they bear have repeatedly sagged under the load.

And while we are at it, why was the house located on Top of the waterfall?  Once again, it Looks great in a photo.  But…you cannot see the waterfall from within the house.  There is a “plunge pool” feature down at the bottom of some steps way down under the house, but from where else can you actually enjoy seeing the waterfall?

Okay, you might say, Yeah?  So what would you have done, Mr. United States Home Architect?  I can tell you: I would have located the house on one of the nearby banks and turned it to look back At The Waterfall.  That way, you could see the beauty of the nature around you, rather than just creating a nice image for an inspiring photograph.

I love Frank Lloyd Wright’s work.  My mother took me to a Frank Lloyd Wright residence in South Bend, Indiana in the 1950s when I was a young boy and it did something inside me; it made me giddy.  That’s the point when I can mark my decision to become an architect.  So, I don’t mean to be overly critical.  It is just that after living nearly 5 decades, I have finally begun to more fully understand what it is that I am seeing and why it was arranged the way it is and what I might have done to perhaps make it a better experience for the people that live in it and pay for it.

Much of how I see things now days seems ultra-clear, as if I am cutting through the hokum of centuries of “style” and I am now simply responding to my clients’ lifestyle needs and knitting that together with their wonderful mountain sites. 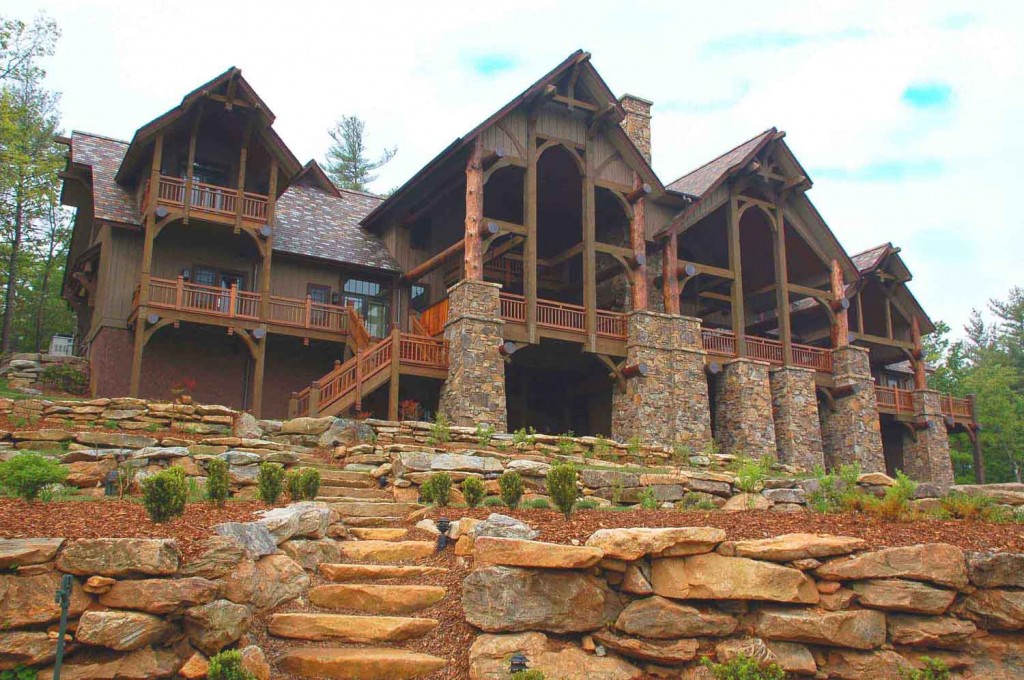 My Mountain Lodge style of design has evolved naturally, using simple things from the environment of my Clients’ sites: granite bedrock on this site?  Okay, let’s use some of that around the bottom of the home to give it a sense of belonging to these particular mountains, shall we?  Plenty of trees around, including poplars?  Swell; let’s use some poplar bark shingles on some of the walls for siding.  Nice views to mountains, and waterfalls and lakes?  Wonderful; let’s design some really big doors and windows that move out of the way to give you a better view of your mountain paradise than you ever imagined possible.  None of this has anything to do with style.  Even so, people say I have developed a style.  They call it “Mountain Lodge Style.”  Fine.  Call it what you will.  All I know is that my clients love it and it looks like it belongs in the mountain environments and that it is timeless.  It is a loving response to the lives of my Clients and their beautiful sites, developed organically for them and their special place in the mountains.  Even though I know my work doesn’t look like Frank Lloyd Wright’s, they share similar philosophies of connection to the environment.

We are: United State Home Architects!  We thank you, Frank Lloyd Wright, for giving us the knowledge and perspective to turn around and look at what you have done nearly a century ago and learn from it all.  Thank you.  Thank you Mies Van Der Rohe, for helping us clarify and perfect our detailing.

If you might be looking for United States Home Architects to design a luxury house, custom-tailored to your lifestyle and site, please consider contacting: