Wouldn’t It Be Nice If…?

Wouldn’t It Be Nice If…?

Wouldn’t It Be Nice If…?
is about how this Architect identifies triggers that impact client budgets on the projects they design for them. 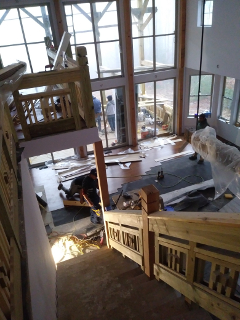 Wouldn’t it be nice if:
we added a timber frame structure?
there was another bedroom and bathroom?
the exterior wall materials became 5″ thick native stone and cedar siding?
the windows were Loewen or Marvin?
the appliances were SubZero and Wolf?
the porches were flagstone rather than wood?
all the cabinets had glass fronts?
the garage had a living quarters above it?
the driveway was made of brick or large flagstones?
the roof was made of wood shakes?

Each of the 10 examples above are all costly.  To the tune of tens or hundreds of thousands of dollars, if not over a million(s) taken all together, depending on the size of the project.  And some also impact insurance rates.  Upgrades like these are not like changing the color of paint on a wall.  Oh no.  These include structural revisions and material changes and other premium features that simply cost MUCH more in the marketplace.  And the above examples are only a few.  There are many more.

Example: this Architect provided all stainless steel double (as in two of nearly everything) Whirlpool appliances in his own new home a couple of years ago for around $14,000.  The firm had another client upgrade to SubZero and Wolf in a similarly organized kitchen several years prior to this and the cost was around $60,000.  In other words: simply changing the make and model of the appliances cost that project $46,000 more than another project with nearly twice as many appliances of a different (but highly reputable) brand with the same finish (stainless steel).  Does that mean that a client shouldn’t be able to say: “Wouldn’t it be nice if…?” and act on their wishes to get whatever they truly want?

Of course not.  As long as they accept responsibility for their choices and responsibility for the increased costs of their project.  All clients should have what they want and have those features to enjoy.  And they need to accept the fact that they have unilaterally increased the cost of their project.  However, most people want to blame others for their woes. And expensive construction cost increases on a new house or major renovation can be major woes.

So: the person you see every morning in the mirror is the main reason for many of your construction cost increases, when you say to yourself: “Wouldn’t it be nice if…?”

The answer to this question is, of course: YES.  It would be nice.  But are you made of money?  Do you really want to pay for it?  Most people find ways to get what they want.  Blaming others usually isn’t the pathway to that privilege.   Liquidating assets of one type or another is the pathway to adding goodies to your project.  Like earned money sitting in a bank account.  Or cashing in an investment.  Or selling something of value.

Get what you want.  Just look yourself in the mirror and say: “I’m the one making my project cost more.”  But it’s going to be worth it, right?  Enjoy.

Wouldn't It Be Nice If