The Time is Now! 3.99% Mortgage Interest Rate! Amazingly Low current home economy 15 & 30 Year Fixed Rate Financing Now Available! Ask Merry and Rand Soellner for the name of this local bank! Rates like this not seen since the early 1950s. BUILD NOW!  Why wait? If your personal finances are doing well, take advantage of this incredibly low financing rate. It is rare when we have the perspective to know that the “low” for a current home economy has arrived.  Much cheaper and the banks would be paying you.

I don’t read newspapers or listen to TV newsreaders any more. All of these sources tend to sensationalize, in my opinion. Merry used to work at a TV station and she said that the old saying about slow news days and reporters biting dogs and writing about that is philosophically true. It’s about getting advertising dollars and when people are scared, they tend to watch, concerned that if they miss a single word, their whole lives will come tumbling down. Well, as Homey D. Clown used to say on the 1980s TV series, Living Color, “I don’t think so!” (courtesy of Damon Wayans).

I haven’t cared to subscribe to media-fed sensationalism about doom & gloom for about 7 years now, and you know what? I am doing just fine. I encourage those of you that are doing fine to keep on doing what you are doing, if it works for you and your family. Our current home economy is fed by people with optimism and success and bright ideas to make things better for the World, our Country, our families and ourselves. God Bless America! Keep on keeping on! 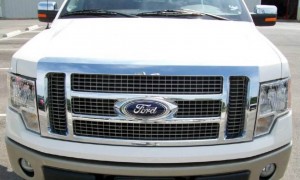 Ford is the only large American vehicular manufacturer that did Not accept any U.S. Government Bail Out money (as of late 2009). Don’t misunderstand me, I like GM. I like Chrysler. I have owned them both and liked them just fine. Any company with hundreds or thousands of on-staff industrial engineers & designers and selling millions of cars and trucks has got to have some significant capabilities. I just had a Chevy Avalanche and it was a terrific vehicle. That’s not the point. Here’s the point: I don’t want my tax dollars subsidizing corporations who already charge me $50,000+ for a nice truck. I pay enough taxes. I don’t need to add to them by bailing out car companies. Once again, I fight with myself here, because I do Not want to see a big car company like GM or Chrysler go under. Huge ripples in our economy; I get that. Even so, I feel better with myself giving my business to the one company who planned their finances better in this free-market system of ours, and who has had the best-selling vehicle in America (yes, vehicle: car or truck: the F-150) for years: Ford. They also are the one company who seems to have better rebates and trade-in allowances than any other right now. I find that hard to understand; why don’t the companies who just received the Bail Out cash offer better incentives? To give it back to us poor schnooks who just gave it to them? Where is that money going? That’s why I just traded in my current truck and ordered a brand new 2009 Ford F150. It is over 6,000 pounds GVWR and is a bona fide truck, which means if you are buying it for your business, you can write it off (check with your accountant to verify your circumstances). My understanding is that there is also a current incentive program from the U.S. Government allowing anyone to write off their 2009 purchase of a new vehicle of any kind, to help stimulate the car-truck industry in the USA. I believe that and hope that’s true; you should verify that with your accountant before taking action. I recently went through the process of shopping and buying this new truck. I ended up ordering it through a Tennessee Ford dealer who had the best deal. The bottom line was, this Ford dealer helped discount this incredible piece of 21st century technology by thousands and thousands of dollars. When I checked with my previous Chevy dealer, he said that “Ford’s incentives are better than Chevy’s right now.” He was right. Once again, I like Chevrolet; nothing wrong with their products as far as I am concerned. But the best deal for the best price for the highest-end features and technology went to Ford in my judgment. I was sold when I saw the new F-150 being tested on Ford’s Dearborn, Michigan testing track, against Dodge, Toyota and Chevy. The Ford appeared to be the most solid vehicle of the 4 being tested. Once again, I also like Toyota and still own a Land Cruiser, which will probably last the rest of my life. But among the pickup trucks, the F-150 seemed to be the most “put together” vehicle of the 4 trucks. I believe that Ford has outdone themselves. Their deal with MicroSoft to create the Sync system is also a major improvement. The Ford dealer demonstrated this for us when we test drove the F150 and he could control a 10GB digital reservoir of music, the navigation was totally voice controlled, he could find the gas prices from all the nearby gas stations, movie listings and more. Amazing. So, I believe I would have probably bought the Ford anyway. Having them not taking any of my tax bite just makes me feel so much better about the deal.

In some respects we are contrarians (people who go in an unexpected direction when many others go in other directions). Right now, we have been told that the current home economy is challenged and possibly recessionary. This may or may not be true. The important thing to remember is that much of this is perceptual. It may not be true for your circumstances. If you are doing well, do not allow media hysteria to influence your happy plans to build a nice house. There is a very good reason to persevere and do what is right for you, rather than cowering with the crowds who “wait for better times to come.” This reason is simple: you have a buyer’s market right now for real estate. Material and labor prices will likely continue to escalate due to a shift in the World’s economy; with China building at a fast pace, consuming much of the steel production of the World and the USA. This will probably only get worse in the coming years, so buy now for your custom house! The obvious question of this philosophy is: “Okay, when do I know that things are as low as they are going to go, and when do I know when market demand is at an all-time high?” This is difficult to judge with regard to stocks and mutual funds, with the exception of statistical histories of performance for individual stocks, funds and the stock market as a whole. Even so, so-called economic gurus still can never be certain of when is the best time for any particular buy or sell action. In our opinion, no one will ever be able to do this with any certainty, as the world’s stock markets are too complex to predict.

The real estate and construction market is a different thing. Based on our experience in the design and construction world, we know that the real estate market is very slow, and therefore prices have reduced substantially. This is a fact. The current home economy indicates that NOW IS AN IDEAL TIME TO BUY REAL ESTATE. If you wait until later, you are likely to pay more; it is that simple. The same goes for construction materials and labor. We have seen land prices continue to decline and material and labor costs continue to increase. We believe these trends will continue, which makes a good case for moving ahead with plans to build now. 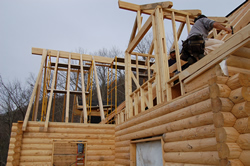 OPEC keeps raising prices and some major oil companies have made their policies publicly known: that they will continue to raise prices as long as people buy gasoline, which of course, they will. Therefore, prices will keep going up for oil and gasoline and there is no advantage waiting for this to go down, because it probably will not. Unfortunately, the increase in fuel costs is probably much of what is behind rising material costs, even though construction has slowed. Once demand for materials goes up, it is likely that material prices will continue to escalate, due to increased market demand. Steel alone, has gone up about 7% in the last year, and is expected to rise another 6+% in the next year. Build now in this current home economy to avoid possible continuing material price escalations.

What will happen to your project, when the economy turns around and demand for mountain real estate and skilled builders and specialty materials increases? You will be one among many. Don’t let this happen to you. Take advantage of the lull in the economy and have everyone treat you like a king and queen, with the best service and lowest prices possible. Financing is at mid to lower single digits; something not seen since the 1960s and 1950s. You have a unique perspective: you can see that your position is one of advantage of lower prices. As wise realtors have said, “God ain’t making any more of it,” referring to mountain land. Get your piece of God’s country now, while it is available at below-normal market prices and favorable terms.

Economic times occur in vast timewaves. It has been about 50 years since the current interest rates prevailed. Don’t wait until 2058 for it to happen again! Half the challenge of being successful is recognizing the position you are in and the value of opportunities around you. Take advantage of today’s wonderful buyers’ market! ——- Rand Soellner, Architect

Prices for houses have started rising again! Buy now to avoid future increases! According to NAR statistics, the median home price was at a low in February, 2008, but as of May, 2008, the price people are paying has risen by 6.6%, rising gradually each month of 2008. So, the corner may have been turned and prices appear to already be rising again. NAR indicates this is indicative of not only rising prices, but expanding market. So start your new home project now, before they rise much further, as your affordability to buy in this current home economy is at a 5-year advantage.