Our company has had several requests for ICF construction for houses lately.  One, in particular, for a structural engineer, who is a client of ours, we are implementing right now.  ICF stands for Insulated Concrete Forms.

ICFs are typically made of EPS (Expanded PolyStyrene) rigid foam, which is an insulating material.  We are specifying an ARXX ICF product that is 15″ thick: 2.5″ EPS, 10″ concrete, 2.5″ EPS.  The ICF blocks interlock like big legos.  There are various deformations inside the ICF blocks and on their tops and bottoms that allow them to interlock and provide support for steel reinforcing steel bars.  The interior and exterior face shells of EPS act as forms for the concrete, which is usually pumped into the forms after ICF placement, bracing and reinforcing.

The client for whom we are designing this Pennsylvania house is a forensic structural engineer.  He’s the professional that major universities, hospitals, and other large organizations contact when they have had structural issues on buildings (initially engineered by  firms other than his).  We are honored that he selected us to design his family’s house.  He said our aesthetic as well as technical abilities made the difference. 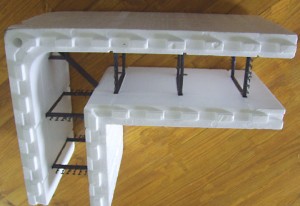 Our client wanted energy efficiencies well above normal code requirements.  The 15″ thick ICF approach helps accomplish this.  His pricing has determined that the ICF forms are considerably more expensive than normal forming techniques, so he has had us keep the ICF to the basement level.  Above that, he has requested 6″ 18 gauge structural steel studs for the exterior walls.  We have introduced several shear walls to help resist horizontal wind pressure. 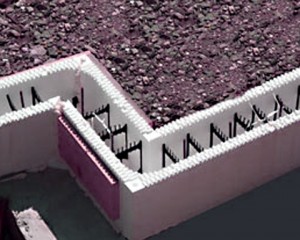 The ICF manufacturer has special blocks to handle corners and other conditions.  The placement of ICFs is relatively swift.  However, being lightweight, the walls will not be straight or capable of resisting the pressure of the concrete to be pumped inside them until additional bracing is added to the formwork.  Also, as the blocks are placed, steel reinforcing bars must be installed in them to tie the concrete together. 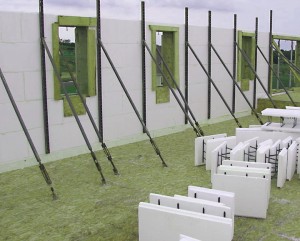 In addition, window and door openings require either manufacturer’s vinyl forms or contractor provided wooden forms to brace them and seal them off from the wet concrete. 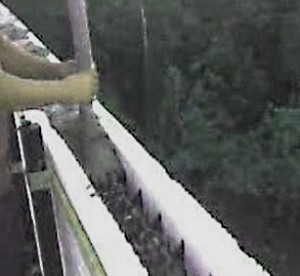 ICF manufacturers know that underground their walls need waterproofing coatings compatible with EPS to properly resist water intrusion.  However, we have a difference of opinion above grade.

Some manufacturers have stated in their literature that their ICF forms plus the concrete is a water and vapor and air barrier.  Sure, the air barrier part we believe.  However, we do not trust the ability of the complete ICF wall to resist water or water vapor.  Why?  Read on…

The ICF blocks are individual piece of EPS, assembled together, without glue or other types of material.  The installation of normal concrete does Not make the ICF wall waterproof or vaporproof.  Why?  Because there are thousands of joints between the hundreds of ICF blocks.  There is no way that all of those compression-fit joints will resist the passage of liquid water, or water vapor.  And how about the concrete?  Concrete is a porous material, filled with air pores, where the water within it dries during the curing process.  Therefore, water CAN get through an ICF wall, and so can water vapor.

Therefore, it would seem to be a prudent precaution to install a water barrier membrane of some sort, perhaps like asphaltic felt (if acceptable to the ICF manufacturer), laid in horizontal courses, overlapping each other, to help keep water and water vapor that gets through the siding material from entering the ICF wall system.

We also are dubious of ICF manufacturer’s claims of being able to directly attach acrylic stucco coatings directly to the EPS exterior face of the ICF.  Why?  There used to be huge class action lawsuits involving a system called EIFS (Exterior Insulation & Finish System).  High-rise condominiums in coastal conditions were typical problem projects.  Why?  Because there was no drainage plane in most initial installations.  Also there was a false belief that the acrylic coating would safely keep out the water from rain.

Unfortunately, this was not the case.  Countless owners, architects, contractors and others ended up in harsh and expensive litigation about the cause of this water intrusion.  The bottom line was that there was an unrealistic faith in the ability of the exterior coating and EPS rigid plastic foam insulation (pretty much identical to the EPS in ICFs) to keep out rain water.

If the designers and contractors of the early EIFS systems had counted on the EIFS to leak, then detailed backup waterproof membranes to stop this moisture penetration and then drain it away (as in the later “drainage plane” EIFS systems), much of that heartache could have been prevented.  So, put quite simply, we do Not trust IFC to resist rain water penetration by themselves.  We believe that it is prudent to add a water-resistive membrane over the EPS, even when it is not below ground and we detail our projects accordingly.