Levels of Security: Clem, Cletus & James Bond is about how this Architect of custom houses adjusts the level of security to suit the intrusion risk. 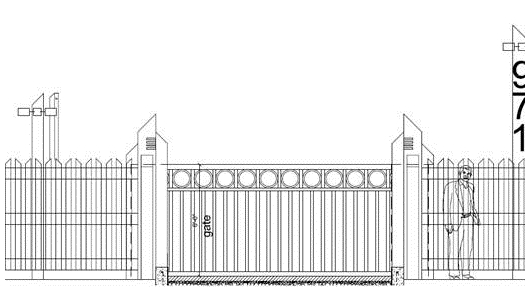 For instance, the custom designed gated entrance (above) was designed by the Architect to handle low to medium level security on a large estate in the country.  And it will likely keep out Clem, Cletus and other casual thieves.  Why?   (see below)

Because:
1.  GATE: There is a gate, which causes you to stop and consider.
2.  FENCE: There is a fence attached to the gate portal, which means you can’t just easily go around the gate.
3.  HEIGHT: both the fence & gate at 6′ tall.  In order to get over it, you’re going to have some means that’s going to attract attention.
4.  DETECTORS: there’s a motion detector light on the protected side of the fence on both sides.
5.  CAMERA: there’s a real-time video camera on the protected side, looking toward the entrance gate, that ties into the owner’s TV channels in a closed circuit.
6.  GATE OPERATION: the gate does not part in the middle (like most residential gates).  Which are fairly easy to open using a nasty old truck and brute force forward, which damages the beater truck, the gates and the operating mechanisms.  No.  This gate is a horizontal rolling type, which means its much stronger.  Will it resist a 20 year old F-150 ramming it at 80 miles an hour?  Probably not.  But that may take out the radiator and engine of the truck, make a very loud noise and could possibly bend hard and heavy debris in the exit portal.  Not a wise thing for a thief to do.  But the horizontal rolling gate could probably resist other, less aggressive attempts, depending on the thickness of its members.
7.  DOGS: there also just might be some mean dogs running around on the property looking for trouble.

In other words, this is a much stronger level of resistance for the casual druggie looking to score something quickly from the house and grounds.  Not a casual break & enter here. And would definitely be a B&E, which raises the bar for the crime and the time someone would do for that.  Clem & Cletus would probably glance at this above arrangement and keep stumbling down the road in their old truck, looking for easier pickings.

How about James Bond?  Is this going to keep him out?  No, it won’t.  Any sort of sophisticated higher level jewel thief or NSA, CIA, Seal Team 6 sort of person will be able to get in just about anywhere, with enough planning, budget, equipment and thought.  But why would they want to do that?  It would probably cost them more time and money than it’s worth.

So what do we do?  We plan and design to keep out Clem & Cletus (and maybe their buddies from the local tavern), but not James Bond.  However, we actually had one billionaire Client for whom we were planning a permanent rocket launcher and a 3,000 round per minute military grade Gatling gun on the top of his house, if there was ever a concentrated armed assault from the property perimeter, along with various cameras, motion sensors and other detection devices, electric inner fence, along with armed guards, attack dogs and a Medieval siege trench with sharpened spears in the dead-man fall.  But your average country estate owner isn’t going to want to pay for all that (or try to acquire the permits for them, or have all of those dangerous things around on their property).

All we’ve touched on here, in this simple initial article is the gated entranceway.  There are other aspects of perimeter security, involved other fencing types, landscaping and other aspects.  Those are subjects for a future article or two.