Jurassic Park is an amazing resort theme park within the Island of Adventure larger theme park, as part of the even larger Universal Studios facilities in the Orlando, Florida area.  Rand Soellner Architect was Architect of Record on about half of the buildings at Jurassic Park, including various restaurants, waiting line queue structures, palaypas (tall turret-like timber log post structures), Triceratops Encounter (see below- click photo below to see video), 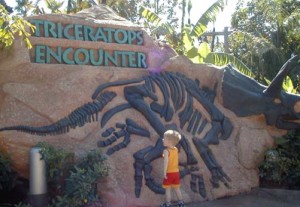 And the majority of the architectural specifications for the entire project, including the majority of master architectural details.  Rand Soellner’s signature and seal exists on these documents, on file with the City of Olrando’s Building Department as part of the permanent record of this $50 million to $74 million theme resort project.  A tremendous amount of coordination was necessary, involving professionals from a team from around the World including the