Being a San Antonio Home Architect is an interesting job: to merge some of what makes San Antonio a destination (RiverWalk, SeaWorld, UT, SA Spurs) with its history (The Alamo, historic neighborhoods).  The Alamo itself was originally named for Saint Anthony (Mission San Antonio de Valero in Spanish).  It was relocated several times from 1716-1724. 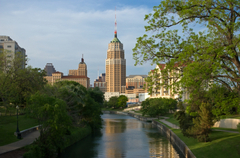 Many people probably can’t get past the in-your-face features of the San Antonio urban area with its famous RiverWalk.  This is on a par with Venice, except here, the buildings are standing straight and tall.  Even a San Antonio home architect would want to spend some time there. 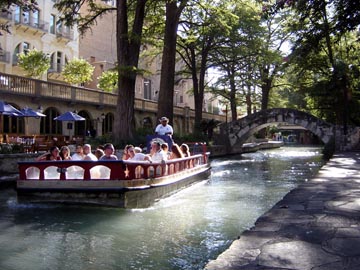 This attractive and unexpected feature is a major tourist attraction, along with the motorized gondolas that are a must for sightseers.

San Antonio is a very dry region and the surprise of that much water as an urban river attracts people like a magician’s act in which a lake appears out of nowhere.

This beautiful water feature integrates properties along its course and nourishes the economy as much as the landscaping.  Couples enjoy walking along its edge, dining along its banks, savoring the environmental coolness near its winding way.

How would a San Antonio home architect begin?  How about with the history of single family homes in the area?  This should get us back to the “roots” of what is there now.  San Antonio’s most historic neighborhood is the King William district, which was farmland for the mission.  This property was subsequently claimed by immigrating Germans and bisected several times into street blocks for homes.  Major work was accomplished in the 1850s establishing this district.  Several styles of historic architecture coexist here, Italianate, Greek Revival and Victorian.

A San Antonio home architect has several options: try to copy these historic styles, try to be sympathetic to their lines and details, contrast entirely, or be somewhat referential.

There is more history in San Antonio that any other Texas town, primarily due to The Alamo and the fact that the Spanish founded the town in 1718 as part of its New World empire, initially with a military encampment and Catholic missionaries.  The five original missions established by the Spanish still stand today and are huge tourist attractions, the Alamo being one.

In the King William district, the Oge house was one of the early homes to be built.  it has characteristics of a classic plantation home, with 2-story front porches and wide central stair leading up to the main sitting level.  San Antonio home architect Alfred Giles added the 3rd floor and maintained the Greek Revival appearance, with a large central gable roof over the middle of the home (similar to home architects Rand Soellner designs–see further below).

Carl Guenther came from Germany in 1851, moving to Fredericksburg.  8 years later, he relocated to San Antonio near the south end of King William Street and built a grainery and a home, whether formally educated as one, he acted as a San Antonio home architect.  His home used local rocks and boulders in the wall, similar to HOME ARCHITECTS ® houses of today (see further below).

Rand Soellner said, “That’s probably because my great grandfather came from southern Germany (Bavaria) in 1869 and he was a carpenter, and he taught my grandfather to be a carpenter and he and my father built homes and so did I.  Their gables were steeper in Germany because of the snow there and I guess the fact that you don’t get snow often in San Antonio didn’t matter much to these early immigrants, because they built homes the way they had always built them, just like I do.”  Some of this historic work required the skills of timber frame architects.  A San Antonio home architect would have a basis in history and that basis is with the immigrants who designed and build their houses here.

Merry Soellner thought that made a lot of sense.  That is one of the historic reasons why HOME ARCHITECTS ® designs fit so well in San Antonio.  Click here for more information about HOME ARCHITECTS designs.  It seems appropriate that a 21st century San Antonio residential architect would be designing timeless residential architecture, rooted in the history of the area.  Senior staff architect, Soellner has a national residential design practice and is licensed in multiple states.  He is a member of the AIA (American Institute of Architects) and has a national certification with NCARB (National Council of Architectural Registration Boards) which allows Mr. Soellner to be licensed through reciprocity almost anywhere throughout the USA in a matter of weeks.  His work is all across the USA and abroad.  He is available to work on house designs in San Antonio and other Hill Country locations.  His work is featured in books and magazines Worldwide examples of timeless custom house architecture.