Small Circle Park for Front Driveway is about how an Architect designed a small park in the middle of his new driveway turnaround circle.

Actually this lovely little park is for the Architect’s 7 pound Maltese dog.

There’s a bunch of asphalt in the driveway, particularly at the 83 foot diameter circular turnaround in front of the house front porch entry.  And this is rural North Carolina, USA, land of ticks, chiggers and other bugs.  So the Architect wanted a civilized oasis of controlled and manicured green grass to spray and keep free of bugs so his family dog could remain insect free.  Everywhere else on site is rugged rural land or gravel, uncontrolled and too full of bugs for the little dog.  And too far away from the front door of the new custom house.

GRASS AREA
Up until about a month ago, this pretty little park was surrounded by 3″ railroad gravel as a setting bed for the new driveway asphalt which also received a final substrate of compacted ABC gravel for the 2″+ of asphalt.  The Architect personally hand-shoveled about 30,000 pounds of topsoil over various parts of the 5 acre site, including over the barren soil in the circle park, which was virgin woodland.  Then he added grass seed, but nothing grew.  So he decided to get fescue sod from a grass farm about 30 miles away and haul it back on his trailer with his pickup truck (a pallet of sod weighs about 2,500 pounds around these parts).   But before laying down the sod, he got 10 large bags of lawn soil and spread that over the topsoil he had already laid there in the park area.  Then he watered the lawn soil, then laid down the sod.

BOULDERS & CURB
Oh yeah.  About 6 months ago, the Architect/Owner had a local rockyard deliver those 2 large boulders and dump them near the middle of the park.  The larger one is about 7,000 pounds and the smaller gray one about 4,000 pounds.  Those big rocks add a lot of drama and interest to this little park.  He also had several dozen smaller boulders about 18″ around and hand laid those to form the circle park curb edge.  The paver worked up to that barrier with the asphalt.

ROSE BED
There are 16 knockout red roses (2 gallon doubles) evenly space in a 2 foot wide planting bed ring just inboard of the stone curb.  The Architect dug the holes for each first, then shook in Black Kow composted manure into each hole, then sprinkled in some Bayer 3 in 1 rose fertilizer/disease protection/ insecticide granules.  Then he laid down commercial grade weed barrier fabric (that allows water to seep through) and used garden scissors and a razor knife to cut holes in the fabric for the roses.  Then he planted the roses, then shook in some more manure to fill in the planting holes.  Then he folded the weed fabric over the rose holes tight to the roots.  Then he laid down Earth Essentials Pond Gravel (multi-color, about 1″ to 2″ size), completely covering the weed fabric and tight to the roses. These rocks look nice and eliminate the ridiculous yearly chore of installing mulch or straw in bedding areas.  Not a good idea. Why: costly in terms of labor and time, and carpenter ants and termites love mulch.  Better to have a permanent bedding material.  Once and you’re done for life.  Rocks aren’t going to go away.  The Architect’s Real Estate Broker wife added the rusty rabbit sculpture for humor.

THE TREE
That’s about an 80 foot tall red maple, growing in the wild.  It stands about 18″ off the Architect’s center spot for the entire project.  It has nice shade, but also allows ample sunlight to filter through to hit all the roses during the day. 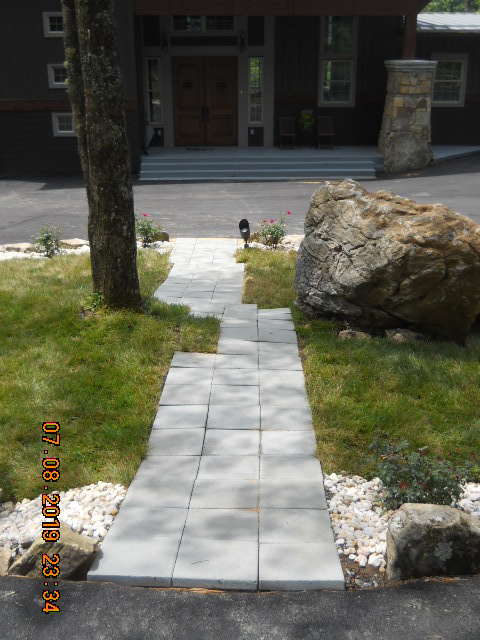 Cost: Less than $100.  Using the Owner/Architect’s own labor.  Each 11.7″ square x 2″ thick concrete paver was $1 from Lowes, on sale.  They allowed the walk to achieve interest and accommodate horizontal and vertical offsets.  The Architect didn’t want to damage the tree roots, so these pavers can allow for give and take around the tree.  The Architect also liked the grid of the paver marching through, giving some order to the otherwise rather rough-hewn composition.  He’s considering hiring a mason next year to lay down some mortar to hold their levelness better than the 1″ of builder’s sand he shoveled over the top of the weed fabric he placed under the walkway area (to avoid maintenance of weeds coming up through the paver joints).

UPDATE: the masonry sand does NOT work.  That is NOT a permanent setting bed.  Why: because every time it rains, the sand gets washed downhill, a little at a time.  Therefore, a couple of masons were hired to pull up all the pavers, lay down new weed fabric and then mix high strength Quickcrete concrete bags (about 20 bags worth) to make about 1″ to 2″ thick of strong mortar to set the pavers into them:

This has resulted in a PERMANENT solution with all the pavers rock solid, straighter and no wobble and no more sand washing out from under them.

Bitsy, the family dog, seems to like the park, named after her.

FUNCTIONALITY
The Owners wanted to be able to walk on a paved hard surface that remained clean, while allowing the family dog to do her business on a manicured lawn.  The walk through the center of the little park accomplishes this objective and also allows visiting guests who park on the far side of the turnaround circle driveway to also walk through the park paved walkway, out of the way of other circulating vehicles, such as during an event like a party.

LIGHTING
The Architect planned for lighting at night, with 3 large LED landscape lights with only 18w actual, but the equivalent of 250w each.  The light fixtures were only $24 each (a real bargain) and the LED lamps only about $16 each from Cashiers Electric Supply.  Also, the driveway and park enjoys very efficient LED solar lights with about a 4-1/2″ square charging panel for each.  Remarkably cost efficient at around $10 each from Lowes and much more light than from earlier solar lights in the past. 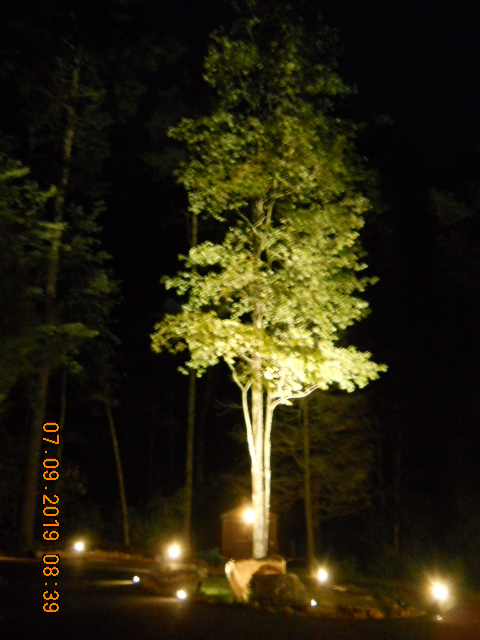 Email this Architect if  you’d like to have a special custom park and house designed for your family.