Stone Utility Area Wall is about this Architect programming, planning and designing and managing the construction of a rock wall to shield views to a utility area of a custom house, while improving the appearance of the utility area from the driveway. 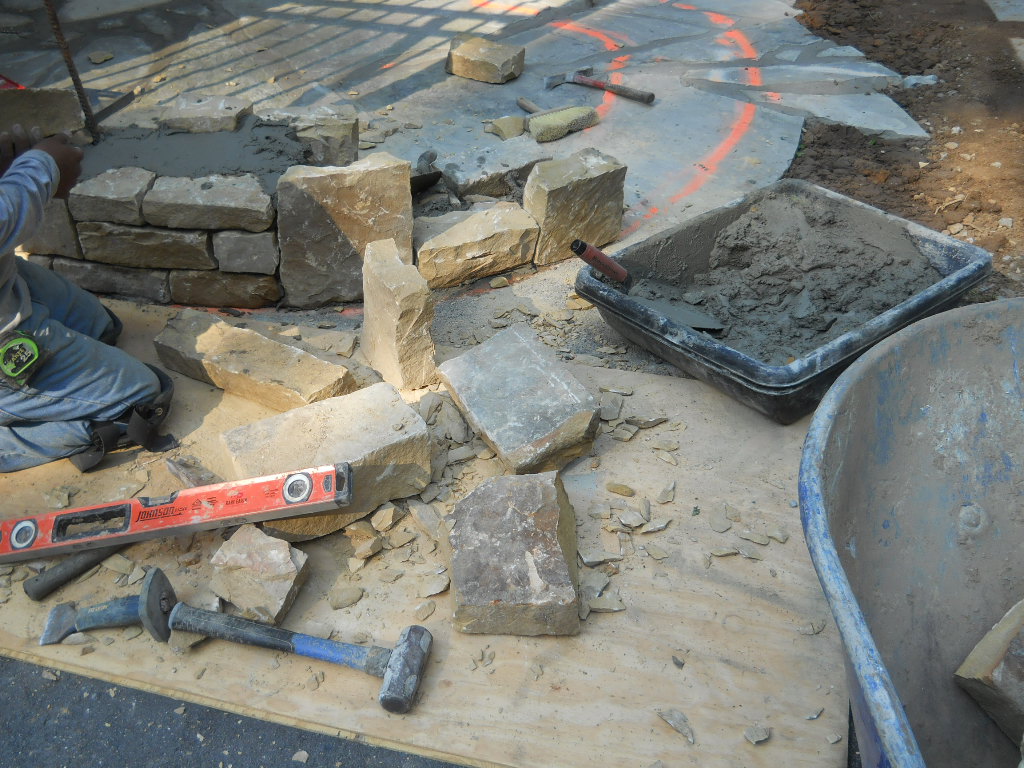 First, there were some severe restrictions on this wall.  As in: no footings allowed.  Why?  Because there are many existing utility lines under the ground here.  Can’t remove those.  Need to leave them where they are.  But then how to make the wall strong so it will stand up to the 110 mph mountain winds, not bother the underground utilities, look great, and block views of the utility panels, generator and power panels/conduits and Internet panels and conduits, while serving as a holding area for the bear-proof large trash can behind it?  Lots to think about.  That’s why there are Architects.

This is unprecedented: an exterior wall that can’t have footings and still remain standing for decades.  What do do?  The Architect decided to make the wall out of stone.  And to have it assembled in two wythes (2 layers) with solid mortar in between the exterior native stone layers.  And to make it wide: 16″ thick.   And to hammer at least 2 vertical steel rebars down into the ground where the Architect was sure there were no conflicting utilities (for over-turning resistance).  And to have at least one course of stone with horizontal rebars (to give the wall bending resistance in wind events).  And to build on top of 2-1/2″ thick solid large flagstones, already in place for the last 2-1/2 years on a solid sub-base of sand/earth/gravel.  And most importantly: to CURVE the wall in a small radius (in plan view), of about 42″ radius, to give the wall overturning resistance due to its geometry.  There are 4″ single wythes of brick fencing nearly 4′ tall in the Virginia countryside from the founding of the USA still standing that are serpentine in plan view, which gives them tremendous overturning strength with no footings.

The lady of the house wanted this wall to block views of the trash can area while simultaneously blocking views of the other power, Internet and other utilities connecting to the side wall of the garage here,and to do so when guests might pass by the utility area from 2 directions (using a new architectural walkway recently installed).  The Architect (HOME ARCHITECTS)  initially drew a straight wall here, next to the driveway, but subsequently modified that to be a curve, with the review and approval of the Contractor’s Senior Estimator (BH Graning’s Lewis Boyer), who returned to the jobsite and examined the altered geometry proposed.  Also, the Architect decided to make the wall 5′ tall, with BHG’s approval.  Why?  To raise the sight lines another foot, further concealing the utilities behind the wall.  The Architect also provided for a black metal gate 4′ wide, hinged off the door frame of the main house to the side, with the latch side at the new stone wall, to further filter views into the utility area, while allowing pedestrian movement with the trash can back and forth by the owners and trash company drivers that service the house. And the curved wall geometry serves to conceal the big trash can from guests walking in both directions on the new architectural walkway past the utility area.  Lots going on here.

Make no mistake: this Architect would always prefer walls to have footings.  This is just one of those very unusual situations (and it was for the Architect’s own house). 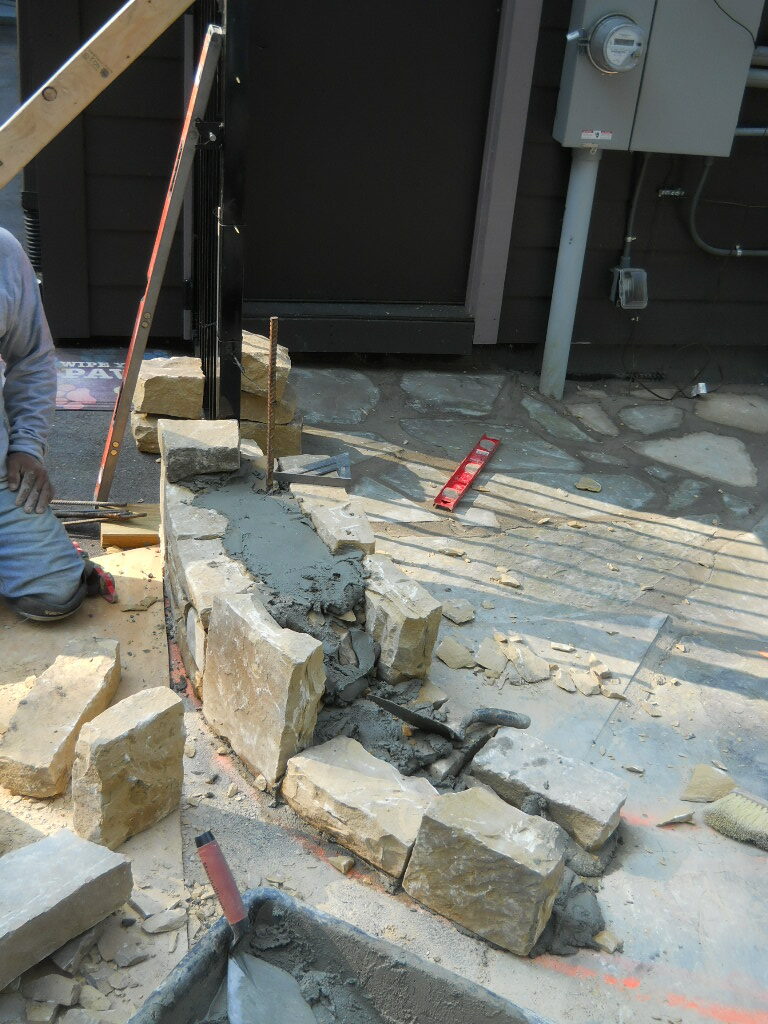 Early stages of the utility wall build.  You can still see the Architect’s orange spray paint defining the plan geometry on the right side. 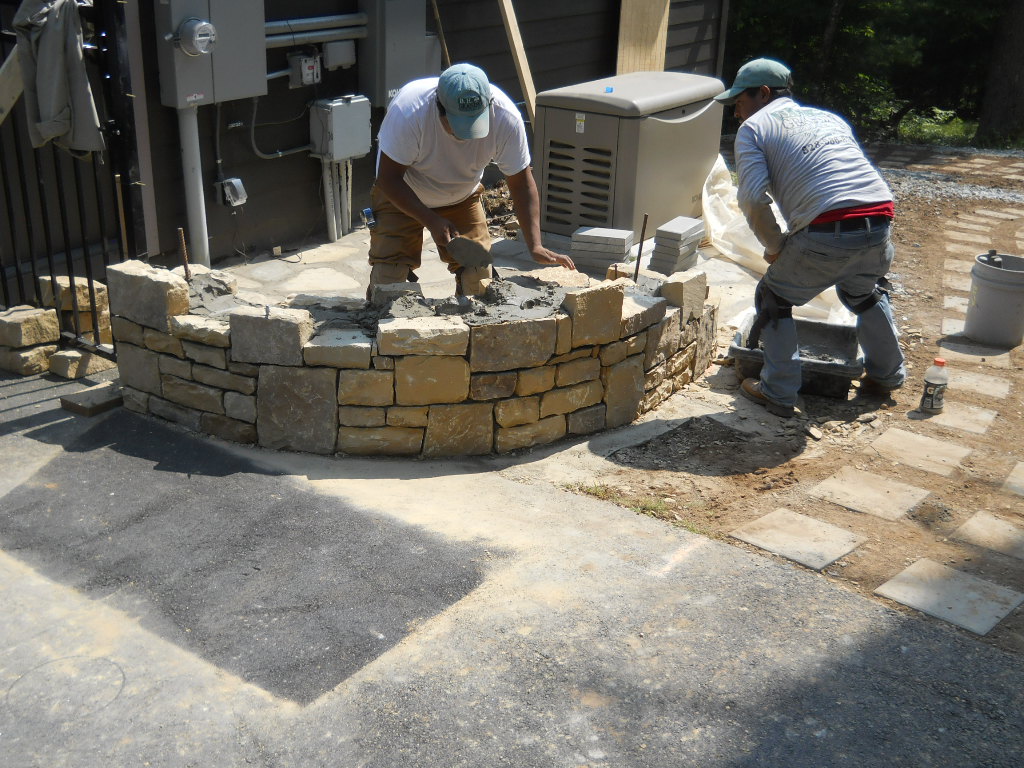 Masons hard at work building the first portion of the stone utility wall. 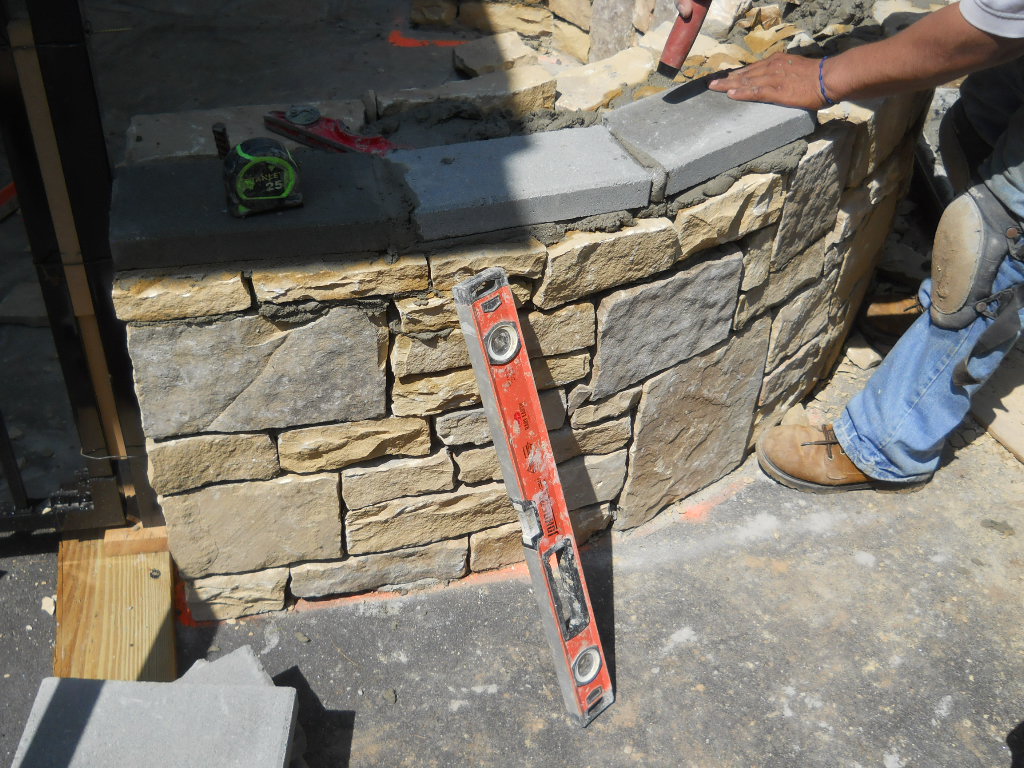 At about the halfway height, the Architect has a reveal of a 1.7″ thick Lowes gray concrete paver, cut in two.  This provides architectural character to the wall, which would otherwise be a just a large stone mass.  It’s details like this that turn a house into a work of art and architecture. 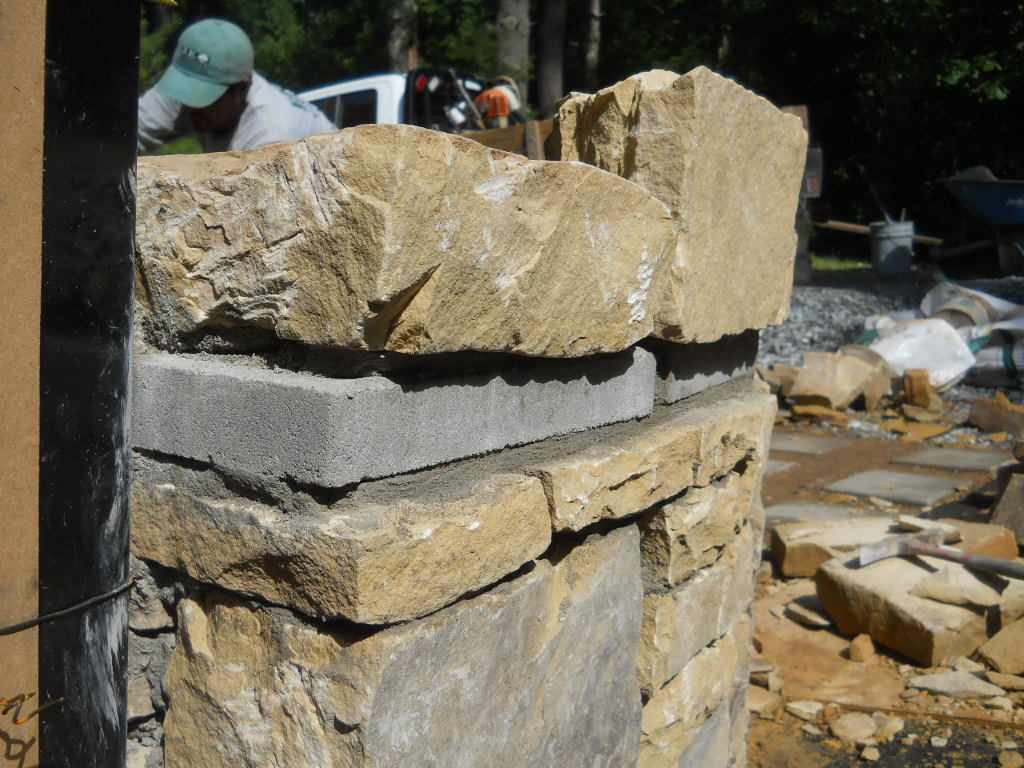 Shadow lines of the next stone course above the reveal add drama and dimension to the wall, making it more articulate. 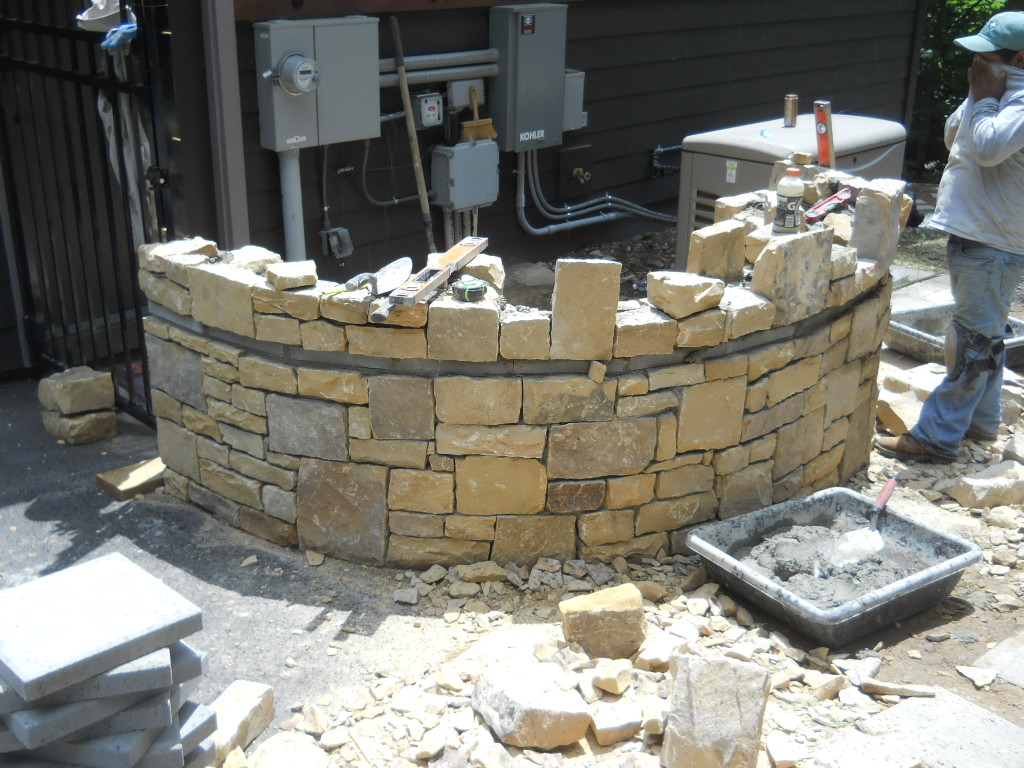 This wall currently has about 200 stones in it, counting both sides.  It’s about halfway.  That means 200 more stones to go, for a total of about 400 stones total in a small wall like this, each precision chipped to size and mortared into place by knowledgeable stone masons like Rojo and his young apprentice Cirilo (Eddie’s nephew). 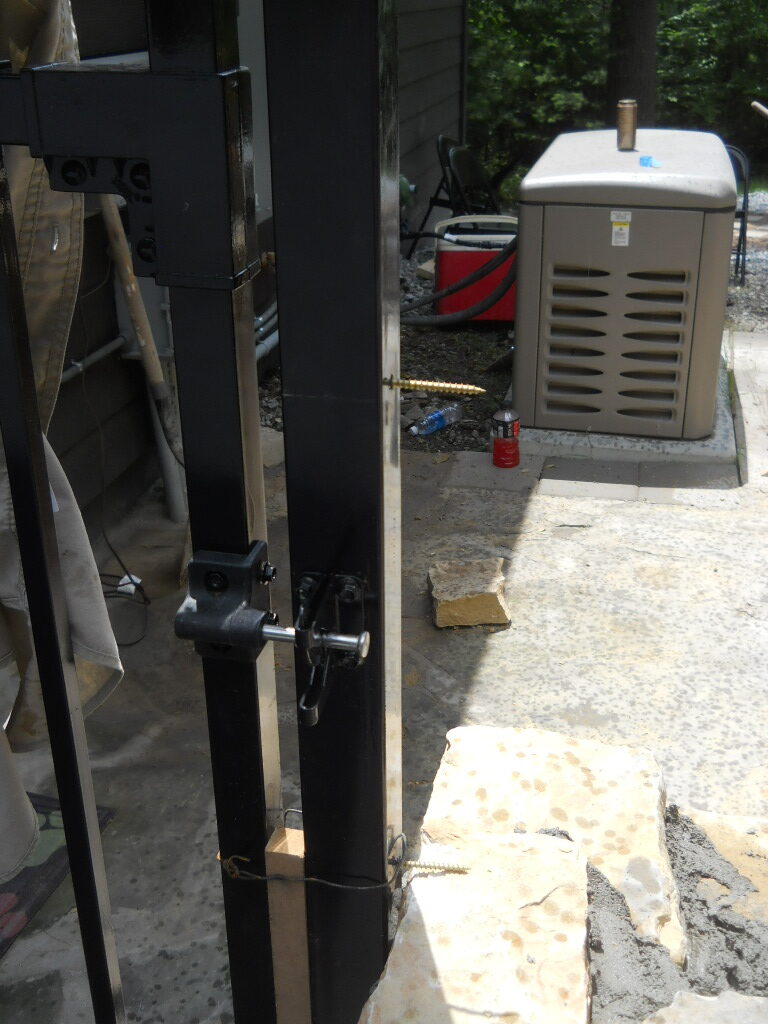 Here you can see (above) the latch pole side of the new gate.  The Architect provided slender but strong lengths of wood blocking and wire ties to preserve the proper spacing for the latch, and also screws to embed into the stone wall as work progressed.  The Architect was dubious about the strength of his own solution but was vindicated when one of the workers tried to shake the latch pole and it held fast, with only a couple of screws embedded.  The Architect felt sure that a couple of Tapcons would have been required, but this simple solution worked. 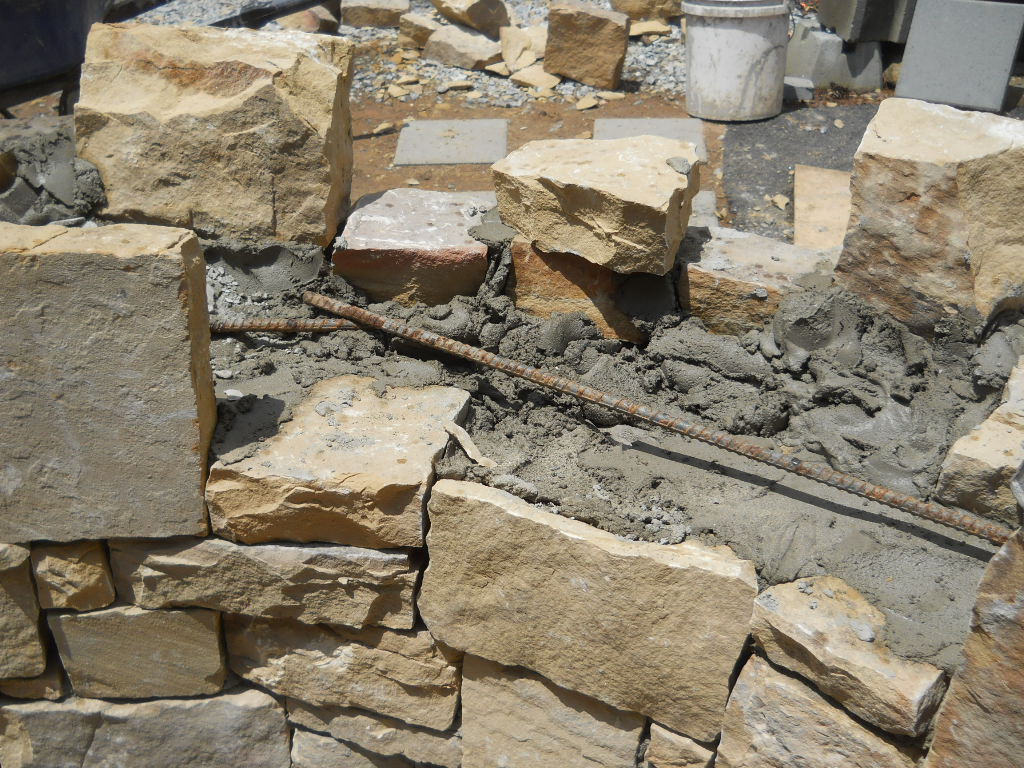 Steel rebars seen here in the center mortar section of the wall, giving it tension strength.

Mixing mortar is an important part of the operation:

Stephen said the formula is:
1 bag of Type S Roankoe Cement (likely contains Portland Cement and Lime).
4 gallons of clean water.
Two 5-gallon buckets of clean orange masonry sand.
All in a wheelbarrow, and mixed with a pickax (a power mixer would have been welcome). 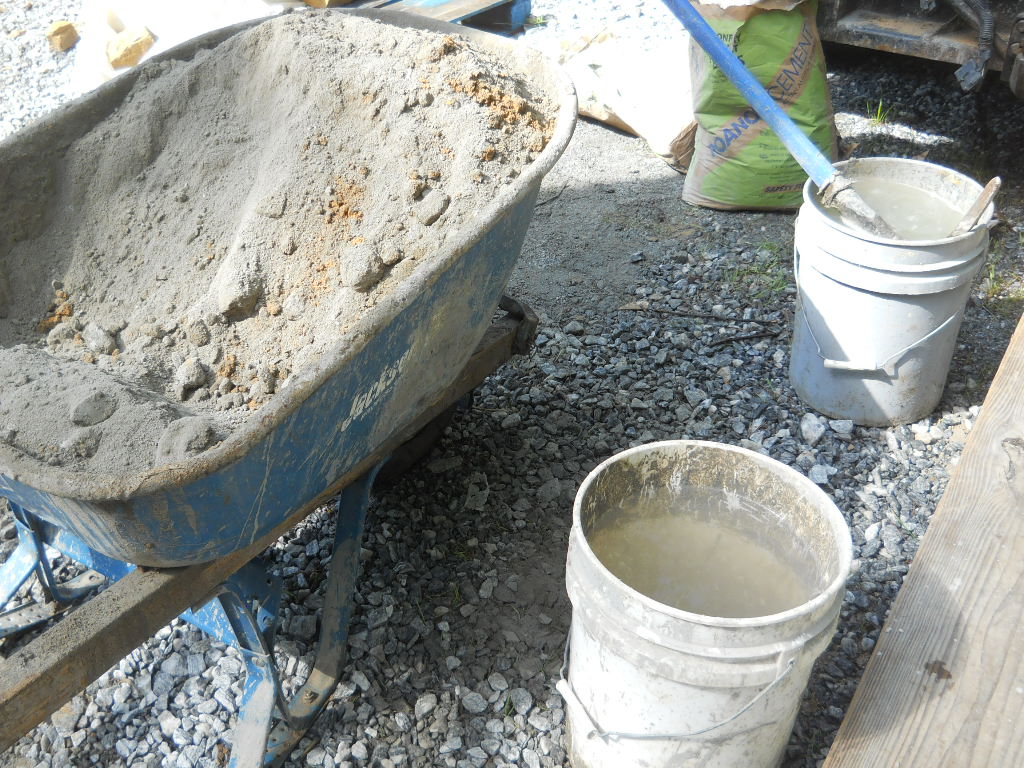 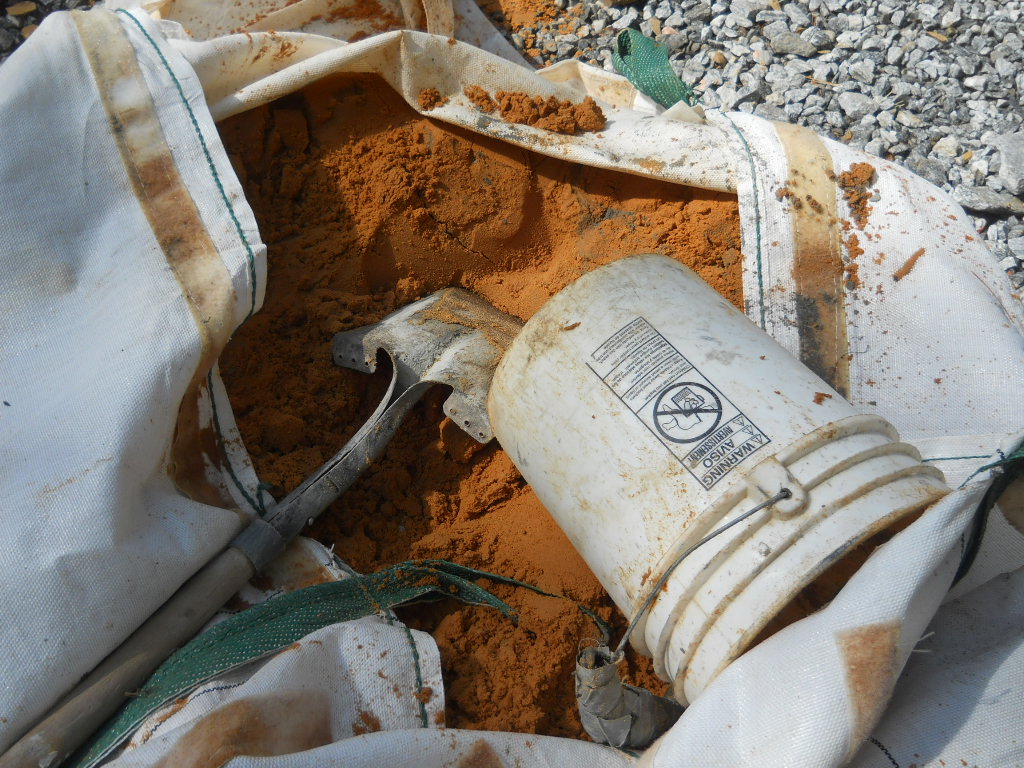 And here we are near the end of a long, hot, 2nd day of wall building, nearing the top of the wall: 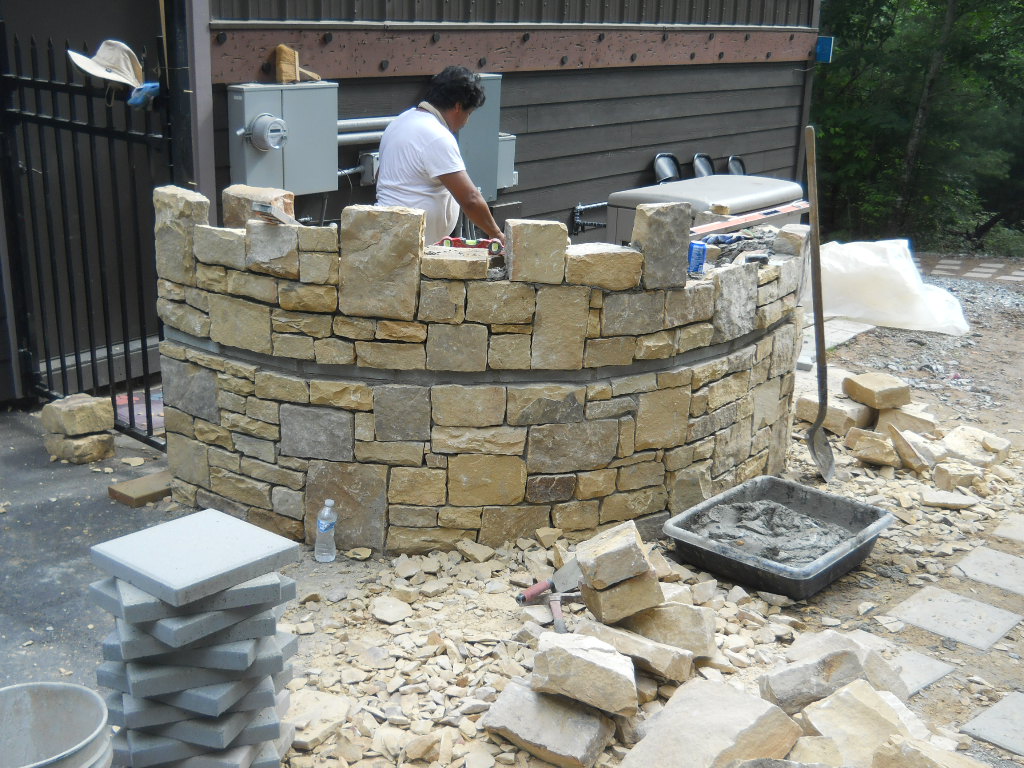 Are you starting to see how this growing “screen” wall is blocking the view of the utilities? That’s the idea.

In another foot or so, the effect will be even better.  Looks like if the rain holds off, this crew will be completing this project tomorrow. 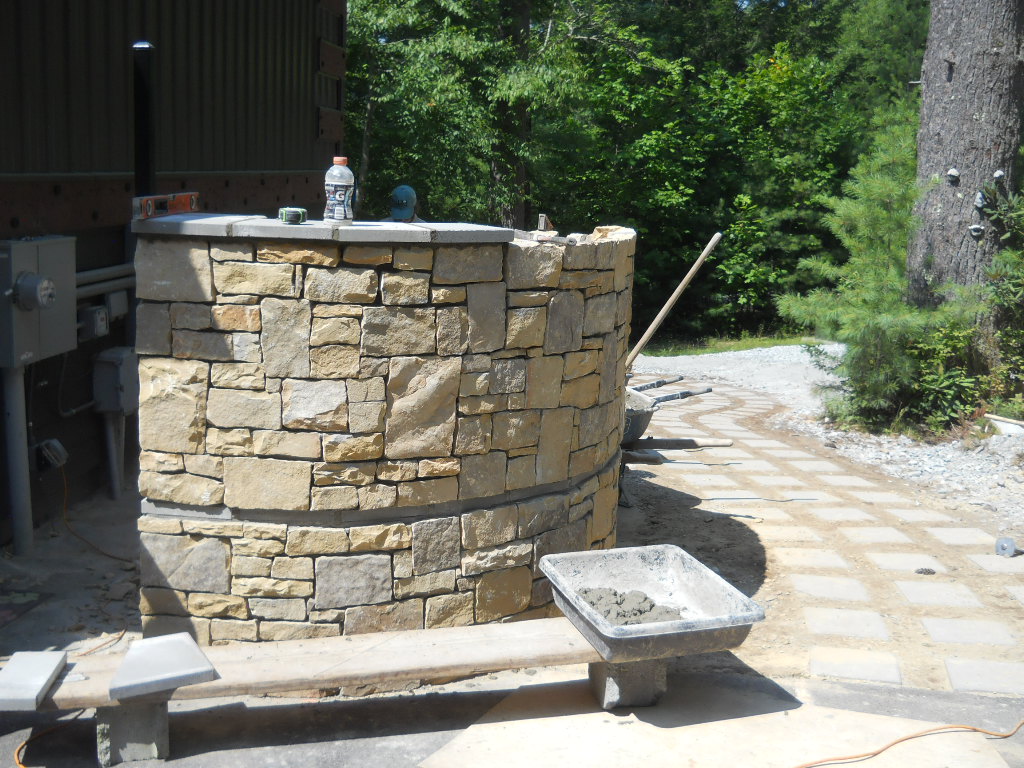 Here we are at the top (above). The top cap stones are now being installed, using the same gray concrete pavers (12x12x2 nominal) that is now in the walkway immediately to the right of the wall, from Lowes ($1.49 each).  Which just goes to show you: it’s not what you use, but how you use it.  In another couple of hours, this will be done.  Will add a final finished photo of that soon.  What’s interesting about this wall is the very refined and almost machine-like precision of the horizontal reveal (just below mid-level) and the top trim (also dead-level), in contrast with the rough native stone, whose geometries are almost rectangular, but purposely off, due to the hammered edges of each of the Ashlar Tennessee field stones.

Architect revises his estimate: there are likely about 500 stones in this small utility screen wall. Notice how it effectively blocks views to the utility area, completely concealing the power generator and most of the conduits on the wall and interconnecting equipment. 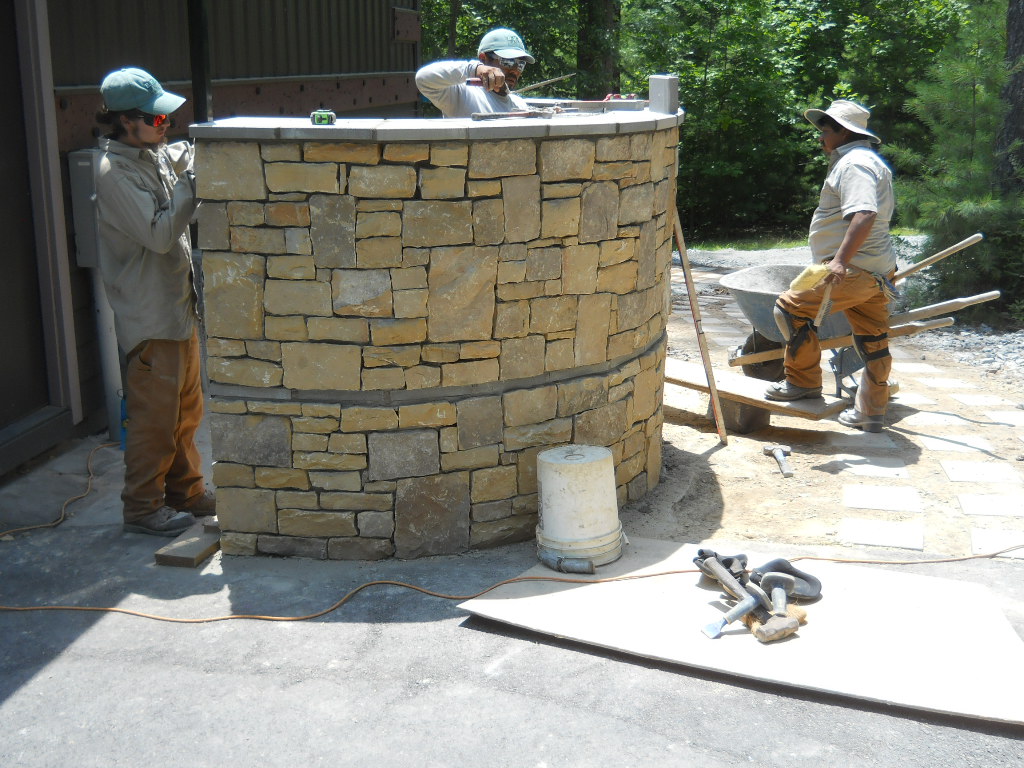 And here’s the wall 99% complete.  Masonry crew is cleaning and tooling classic “dry stack” look joints and wire brushing and sweeping exposed joints.  Note how well this “screen” wall conceals the utilities behind it, which is its main purpose.  Aesthetically, it visually anchors the right side of the house and adds more heavy stonework to the elevations.

Here is the inspiration for the cap paver detail and the middle reveal (below): 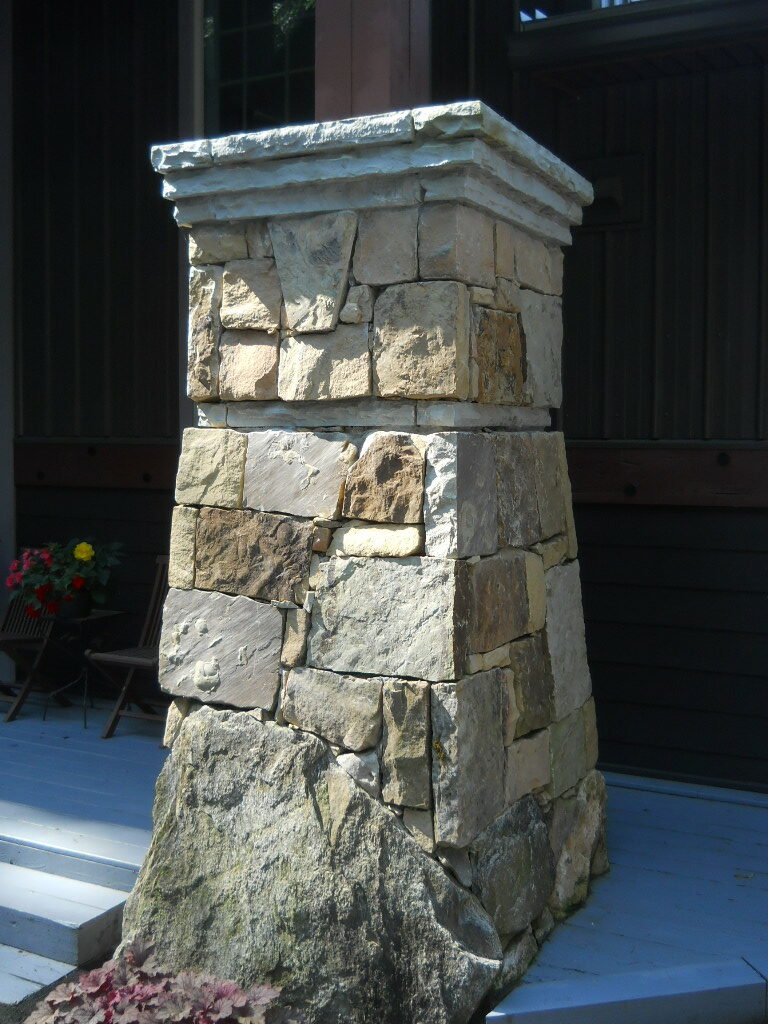 This big stone column proudly sits about 30 feet away from the new stone utility wall, and is the main stone feature on the front elevation of this Industrial Mountain Style house, designed by HOME ARCHITECTS ®.  You can see the triple cap stones (just one on the new stone utility wall) and the mid-level gray stone reveal. This is all part of architecture creating a theme and “words” and “sentences” of architectural detail, that echo each other as one moves around the house, making it all part of the concept.  This big column is made of the same pallet of stone: Tennessee ashlar field stone, in beiges, browns, tans and greys, same as the new stone utility wall. 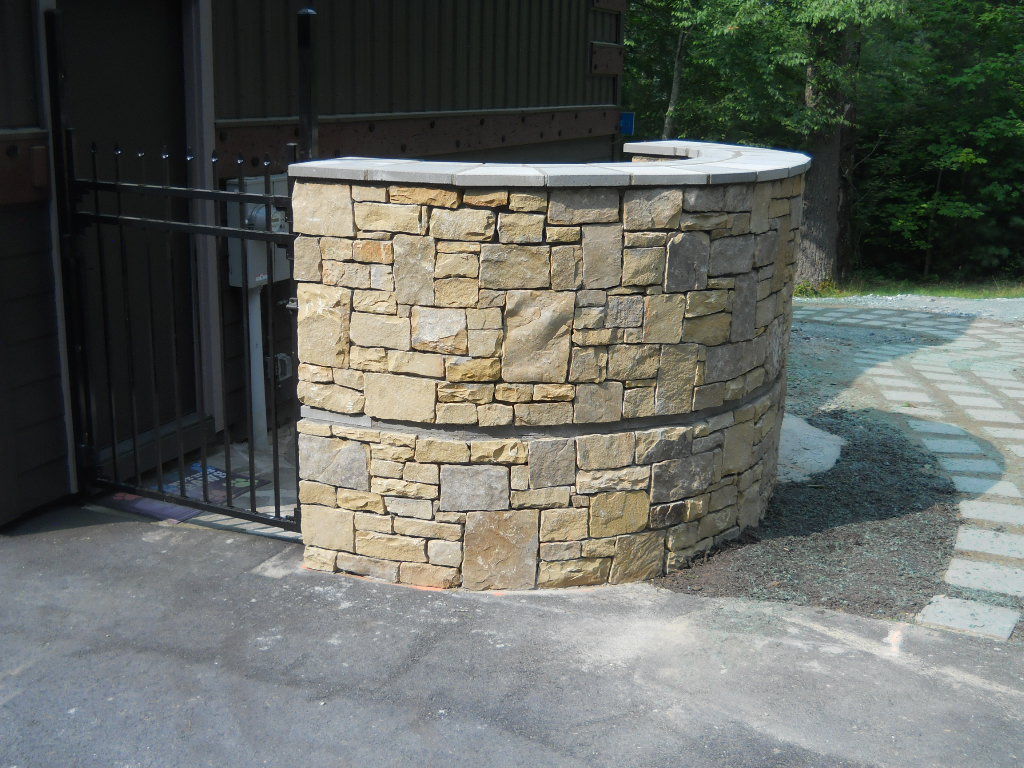 And here’s the stone utility wall finished (above).  All client checkboxes were realized:
√ conceal utilities behind wall.
√ allow pedestrian passage through gate for trash and other activities.
√ anchor right side of house with stone wall aesthetically compatible with large stone column.
√ wall acts as entry point for new site walkway.
√ solid construction to last forever but no footing due to underground utilities.
√ clean up right side of house landscaping. 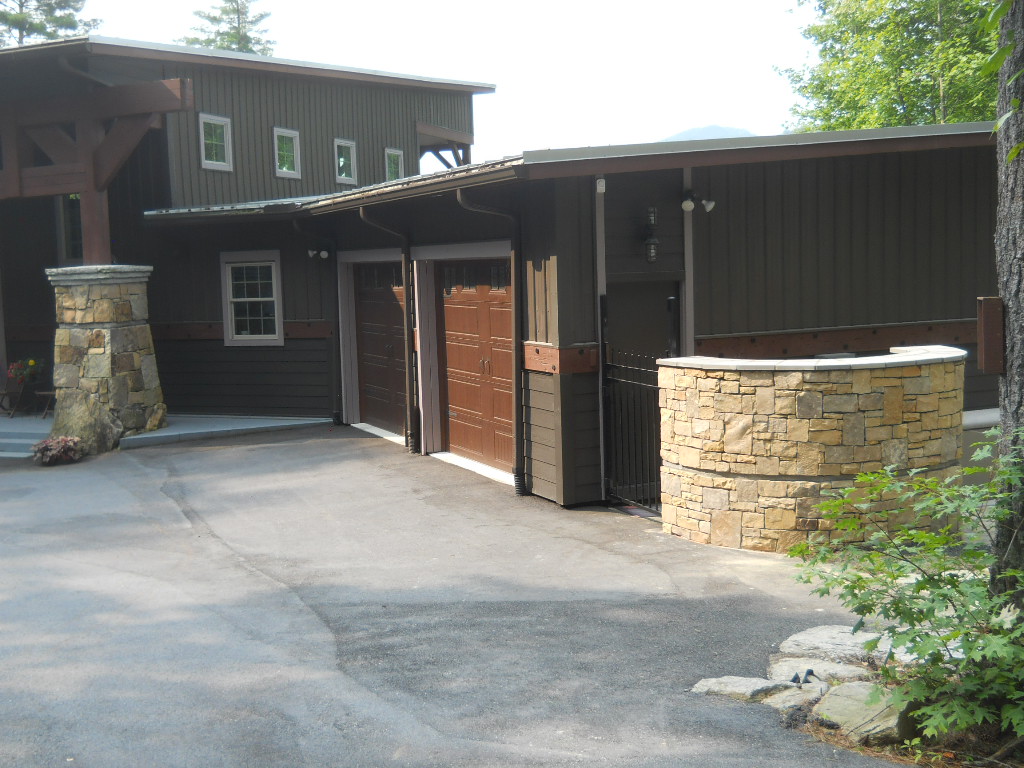 VIEW OF HOUSE FROM RIGHT SIDE (above) 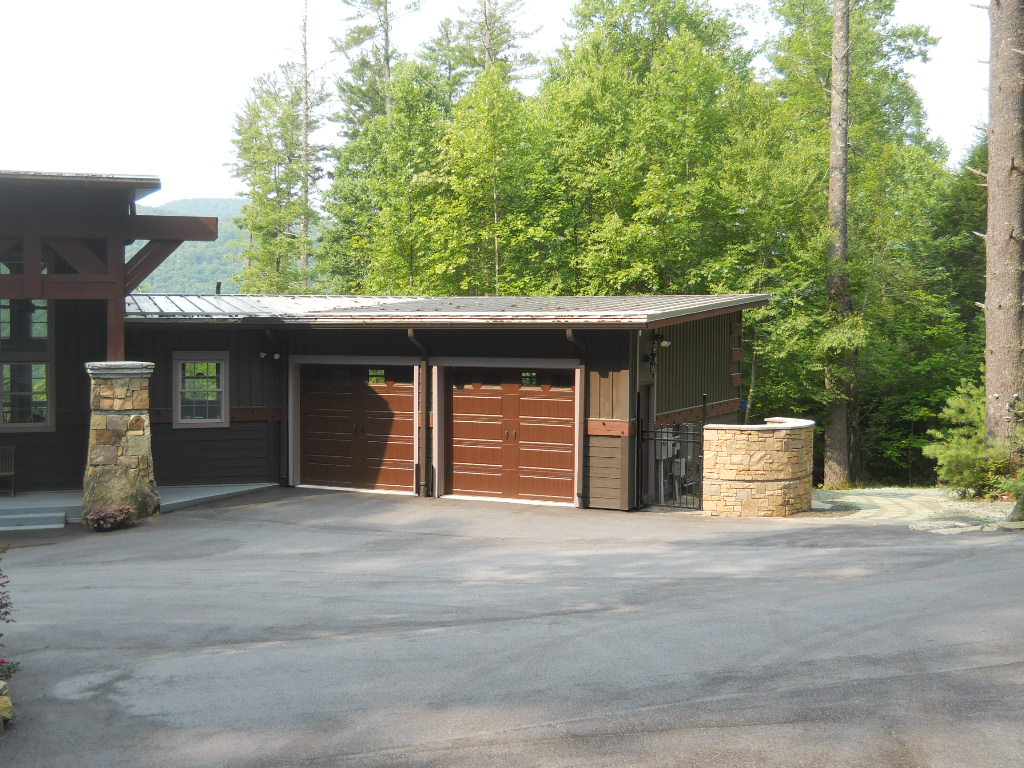 VIEW OF RIGHT SIDE OF HOUSE FROM FRONT (above)